Day Two of the 2019 PGA Merchandise Show was full of highlights. Actually, the show has had an absolute cornucopia of highlights to this point and because of the sheer volume of products I have to try real hard to limit what I talk about each day.

Where Day One was full of apparel… Day Two was much different. Day Two ended up being about putters, training aids, push carts and junior apparel.

Having rolled putters from EVNROLL and Buffalo, NY based T-Squared Putters on Day One I took the opportunity today to meet with Tiffany DiPanni who takes care of public relations for ARGOLF Putters. Some people might recall that I covered their range last year. The France-based newcomers to the industry have not only experienced more brand awareness through TOUR successes (including PGA TOUR Champions Major Championship) but they also made recent headlines when they signed Lucas Glover to their TOUR staff. In 2019, ARGOLF Putters has developed a new mallet putter. Once again drawing from the Legend of King Arthur and Camelot, ARGOLF Putters introduced PGA Show attendees to Mordred. Mordred is a putter that’s 360 grams and has a scintillating blend of fantasy meets functionality. Boasting a MOI of 9,800 it’s as forgiving as it feels soft. Stroking putts off of the toe resulted in holed putts with no twisting at impact whatsoever. At this time, I won’t mention the fact that they’re bringing some beautiful irons to the market (oops I’ve already said too much).

In the past I’ve written some pretty scathing stories about my views on what’s wrong with our game. I’ve never been shy on pointing a finger at the “Old Boys Network” and the general inability to accept new ways of doing things. This can definitely include the way that the game is taught.

For many newcomers to the game of golf the game is often taught in either mechanical terms and/or in such a way that it’s actually quite convoluted. But, what if there was a way to learn the game that was through visual keys or prompts? Personally, I understand things much better when I have visual queues. Enter Colour Path Golf. Through the use of plastic pieces (ruler length and shape, circles and squares) you can learn proper swing path and many other aspects of the game without getting too mechanical. The pieces come in three colours (blue, red, green and yellow) and each colour has an intended meaning. For example, when a yellow piece is on the ground it’s an area of the swing where you need to show focus. While a red piece means it’s somewhere that needs to have power applied. Stay tuned as I will be writing a more comprehensive piece on Colour Path Golf in the future. This could help revolutionize how golf instruction is taught and ultimately learned.

One of the single best ways to burn calories is to walk when you play golf. Carrying your golf clubs is fine but using a push cart is better. It makes the walk even more enjoyable and it doesn’t strain the body as much. One of the push carts that I looked at today and really liked a TON is the new Nitron push cart from Bag Boy. The Nitron is likely the easiest push cart to open and close and is accomplished in an easy step or two. Part of the genius of the unfolding of this push cart (or trolley) is that there’s a canister of nitrogen that helps to unfold the push cart. It’s a very simple and quick two-step system to open the cart. Folding the cart back up is just as easy. Not to mention that it’s lightweight as far as push carts go. 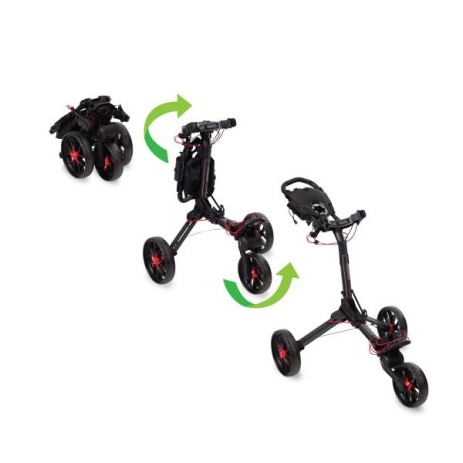 In the golf industry there aren’t many brands that cater strictly to junior golfers. Especially when it comes to apparel and equipment. Before today I only knew of The Littlest Golfer and U.S. Kids Golf. Now what if I told you about a company that produces stylish, fun golf apparel, accessories, footwear and shafts for junior golfers? Now what if I mentioned that the shoes go down to the smallest golf shoe that I’ve seen to date? This is what Ashlin Designs is all about. Ashlin Designs recognized that there was a part of the golf industry that didn’t fully address junior golf apparel completely. Recognizing this lack of a market they endeavoured to change that… and they have. They have created apparel that even includes features like a four-way stretch material.

I’d just like to reiterate that there were a ton of highlights from the floor on Day Two. Please look for in-depth articles and/or reviews in the future regarding these and many other products.