For some time now there’s been a debate about “what’s wrong with the golf industry”? So much in fact that while I was at the PGA Show the PGA of America held a panel of “who’s who” to discuss where the problem lies. A recent comment made by Lee McCoy I will not discuss much at this time but I will say this. Lee remember one thing young man. Karma is a bitch and it’ll bite your ass one day. Your approach with those young fans was beyond reproach. (If you aren’t wanting to read… please see the video that I recorded at the bottom of this post.)

I sat there listening in just for a little bit and they tossed around a variety of theories. All of them coming close to saying it but never wanting to “jump on the grenade”. I was hoping that someone… anyone would have the “testicular fortitude” (see balls) to say it. Nobody did. Here’s the problem. It’s the “old boys network” themselves.

Is the issue directly associated with the PGA of America? No but it’s the older generation of golfers that presents the issue. It’s these antiquated dinosaurs that still play the game whom are so stuck in their old, miserable ways. Never really open to change or accepting any sort of notion of change. Just think about it for a second. Let the stereotyped image of Caddyshack’s Bushwood Country Club sink into your mind for a minute. That clean, sterile, posh country club lifestyle. It was one of these types of places that kept me away from playing the game in the first place decades ago. I was interested in playing the game but one day while riding my bicycle home from the beach flying out of the driveway at a course came a car. Minding my own business I was ejected off of my mountain bike and ended up in a ditch. He slurred after getting out of his car “Fucking stupid kid… what are you doing?”. He was some kind of drunk and reeked like a brewery. Irony would prevail years later as I was the Director of Golf of that course in 2016 and to this day I swear he was one of my member’s. Ultimately, that course was mired in the ways of 1985 and when I approached someone on the board about new ideas… basic things like “Twilight Rates” or “Course Rangers” it was met with a simple “we’ve never done that before” mindset.

Why is golf like that? Why is the industry so stuck in their old, stale ways? Golf oatmeal!!  Golf oatmeal is simply the fact that people tend to walk, talk, teach, swing, and doing everything golf in the same old beleaguered manner. A world where everything is bland, looks the same, is flavourless and is slowly bubbling away eventually sticking to the bottom of the pot. The majority of the industry is not willing to accept new ideas or fresh ideas. New approaches are met with so much skepticism and cynicism that it melts the mind. Whether it’s equipment, instruction, apparel or ways to get people to participate in the game and show up at golf courses worldwide. The game isn’t dying but without an influx of new blood it will die a slow painful death.

So many older golfers point at millenials because well… they have a label of being a spoiled, no good, “I want it now” generation. I thought this way until recently but then I had an epiphany of sorts. Don’t these “old boys” realize that they too were once young bucks and that one day the younger generation will inherit the Earth. It’s this younger generation that IS going to save the game. How? Because of the ideas now will move forward because eventually the old dinosaurs become fossils. In other words… they’ll die. 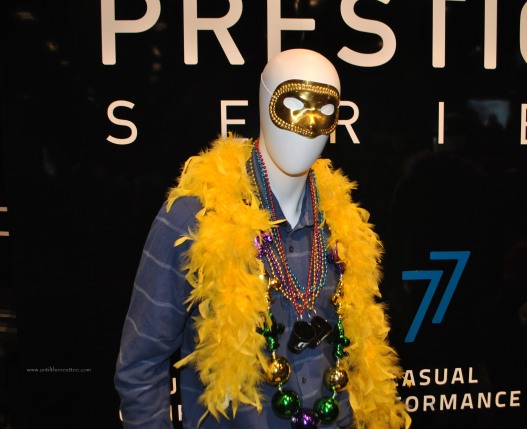 The game needs more fun. The LPGA has nearly an entire roster that gets it… they really do but the support that they receive from the average golf observer (fan) isn’t what it should be. On the PGA Tour guys like Rickie, Jordan, Justin et al understand. These guys are tremendous for the sport. The game needs brands like Travis Mathew to be bold and fresh. They were always a golf brand first and a lifestyle-brand second. Their booth is to the PGA Show what “Al Czervik” was to “Judge Smails”. They’re all about fun! A brand like Chippo is a fresh approach to an old game. Great in the backyard, the beach or a tailgate situation Chippo still puts a golf club into someone’s hands. Brands like Loudmouth Golf, are important because not everyone wants to wear khakis. People like to express themselves. I do and the best thing that I ever did was walk into the Travis Mathew booth 2 years ago. Vertical Groove Golf brought a new approach to golf club design. I could go on… but I won’t.  I made a video to support this article.

I have a secondary mission. Not only is Until The Next Tee about educating golfers on the latest in the golf industry. I’m also here to add some flavor to a world full of bland oatmeal. No longer should this game look, sound and feel the same.