CanCon is the abbreviation for Canadian Content as used by Canadian radio and television stations.

The President’s Cup. The team golf competition that pits the best male professional golfers from the United States versus a team of professional golfers from the rest of the world (from anywhere but Europe). My opinion of the President’s Cup has always been the same. While I know that my opinion isn’t likely shared by many (and I’m okay with that) I have long felt that it was a second-rate event… Almost an afterthought.  To me, the event falls in third place behind the Solheim Cup and the Ryder Cup but not necessarily in that order.

The one good thing (for me) that comes out of the President’s Cup is that unlike the Ryder Cup there’s a chance that a Canadian will make the International Team. As a golf fan, who would ever forget the Weir vs Woods showdown at Royal Montreal in 2007? Surely not I. I felt a lot of national pride by watching the diminutive lefty take care of Tiger Woods. Who doesn’t love a good old-fashioned “David vs Goliath” storyline? Just because I said how I felt about the event doesn’t mean that I ignore the event altogether. Going back to 2007 it was that match that salvaged watching the event. Bear in mind that at the time I wasn’t a golfer as I am now. That’s been an evolution in itself. 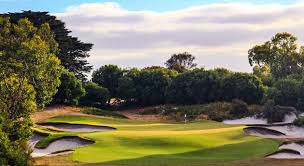 The 2019 President’s Cup will be taking place in Melbourne, Australia from December 9th to the 15th. The International Team is being captained by legendary silky, smooth swing Ernie Els and is led by the 17th-ranked (OWGR) Adam Scott. Joining him are fellow international stars Hideki Matsuyama, Marc Leishman, Louie Oosthuizen, Abraham Ancer, and Haotang Li. The evening of November 6th was the night that Captain Els would make his 4 Captian’s picks. There was speculation over social media, some of which I took part in. See my prognostication below.

Hoping it's at least one of @ahadwingolf and @coreconn. The other two Day maybe and Im.

When the picks came out I was correct on all but one. From South America, Chile’s Joaquin Niemann made the team marking my only mistake on the predictions. I’m hoping that Els didn’t make a mistake in this selection. If it were me, regardless of my patriotism I would have taken Conners over Niemann and likely Hadwin. He has the hotter hand in 2019 and especially over the last two months or so. Don’t get me wrong I’m stoked for Hadwin’s selection but it’s the Niemann selection I’m not crazy about. Some people agree.

Niemann is a stupid pick.

Yeah, I don't know about that one. With all things being equal and the way that they've played the last two months… I take Conners every time. Regardless of national pride.

Ultimately, I hope it wasn’t a matter of pick adhering to political correctness and selecting a guy from South America to make that part of the world happy. Think of it as a “sort of” Participation Ribbon. Maybe there’s a little “homer” and “maple syrup” in my blood. I get it, Niemann currently sits 54th in the OWGR and Corey Conners 55th. But their recent results over the last two months sees the record of Conners blowing those of Niemann out of the water. When it comes to captain’s picks you have to go with the hot hand and that was Conners over Niemann.

Niemann at the 2018 RBC Canadian Open.

Personally speaking, if I’m Captain Els I want to give my team the best possible chance at winning. I’m not suggesting that Conners is the savior here, I’m just suggesting that he’s the better, smarter pick. Especially seeing that Team USA is so top-heavy with talent and that’s not including their Captain’s picks who have yet to be selected. Out of the Top 17 spots in the OWGR 11 are occupied by Americans. Some of whom are likely Captain’s picks like Gary Woodland. Who at #16 is ranked higher than the top-ranked International player. Not including that we’ll likely see their Captain (Tiger Woods) being one of the said picks.

Folks, it’s going to be a bloodbath.