Have you heard of AXiS1 Golf? If not, I’m really hoping that by the end of this article, you will have heard of them and you’ll give their putters a look. I’d like to extend many thanks to Phil Long for giving me the opportunity to test and review the Tour-S putter from AXiS1 Golf.

Mr. Long is the Vice President of Marketing and Sales for AXiS1 Golf.

For golfers not familiar with AXiS1 Golf, it is a golf equipment manufacturer that produces putters that are “torque-free” and perfectly balanced. How do they achieve this feat? More on that later.

AXiS1 Golf putters are the brain-child of inventor Luis Pedraza. Launched in 2009, AXiS1 Golf was in the news in a big-time way last year when they announced that current OWGR World #10  Justin Rose had signed with them. Fun fact. Rose has been playing AXiS1 putters since 2019.

What makes AXiS1 Golf putters unique is something that I already touched on. They produce torque-free, perfectly balanced putters. Moreover, unlike most putters on the market they don’t naturally open up, instead, the face of the putter remains square through and post-impact. Thus allowing golfers to make strokes that hold their line better.

How? Luis Pedraza accomplished marvel of golf engineering by “pushing the weight forward with a patented heel counterweight that, for the very first time, places the center of gravity right on the center of the striking face and perfectly aligned with the axis of the shaft”.

When it comes specifically to the Tour-S putter here are some of the details. The head weighs 350 grams and is completely CNC-milled from 304 Stainless Steel. Each Tour-S putter is individually balanced. Lastly, there is a stainless steel weight screw in the toe for counter-balancing purposes. 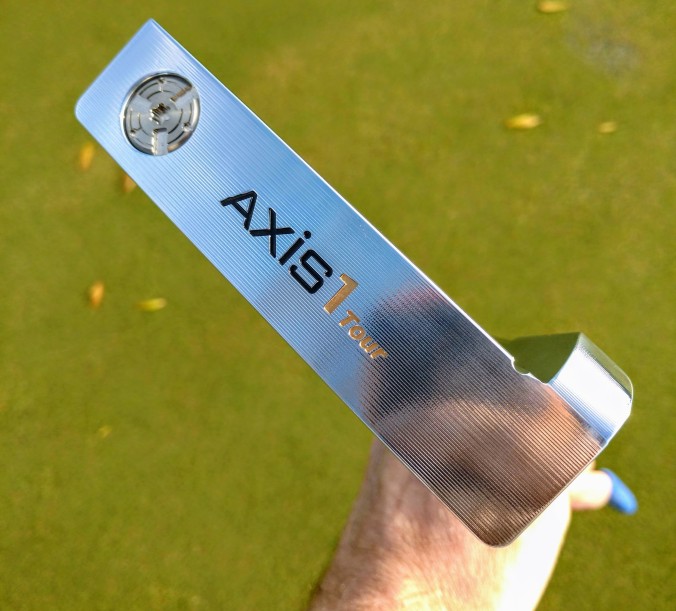 I was really excited to receive this putter for testing as I’ve been admiring AXiS1 Golf putters for some time. The first and last time that I saw putters from AXiS1 Golf was at the PGA Show a few years ago. On that occasion, I remember walking by their booth and I noticed the putters. Honestly, it was the shape or design that caught my eye. I meant to double-back to their booth but, I ran out of time. So I was happy to receive this “mulligan”.

Upon receiving my parcel from AXiS1, I was like a kid, I was consumed by excitement. So next came the unboxing. When I opened the box, the first thing that I noticed was the headcover. It’s a vivid blue (Cobalt blue maybe) and the contrasting yellow stitching really stuck out. Often, when it comes to equipment, you can tell a lot about the quality just by looking at a headcover. The headcover is very-well constructed, with a very stout velcro enclosure. I really liked the “pebble-grain” finish of the leather. The deep-etched Lamkin Grip is a perfect match.

Removing the plastic from the head I got my first look at the head of the Tour-S. The head itself is gorgeous and it is a blade-style of a putter. I love the milling of the face. It’s sharp, and it looks quite exquisite. The rear-portion of the Tour-S is pretty clean with the branding being visible on the rear-side and a simple alignment aid.

One of the concerns that I had with the aesthetics of the design was how the Tour-S would look in the address position. There is no reason to be concerned. The very first time I put it down in front of me and behind a golf ball, I didn’t see it. Thus, in my opinion, the design is not “off-putting” (for me). I found the optics of the Tour-S interesting. The head almost seems bigger than it is, and it feels like you cannot miss the sweet spot. So it also translates into building confidence. 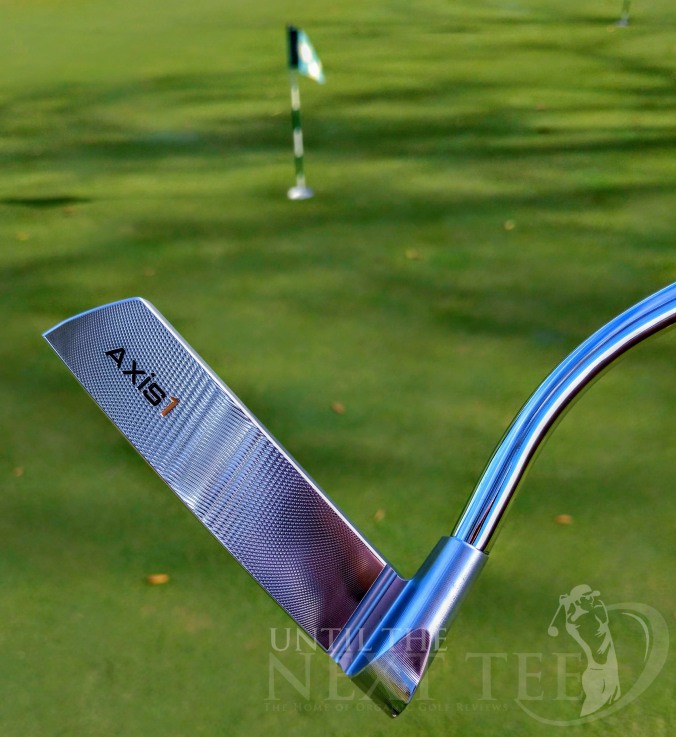 The Tour-S putter might be one of (if not) the best rolling putter that I’ve tried. The golf ball feels so good off of the face. There seems to be “no skid” and the distance control with the Tour-S has been very good. I’ve rolled putts in a variety of places and on different surfaces. From the day I unboxed the Tour-S on an indoor green at “The Dome” (Harris Hill, NY), on the practice green at the YMCA Par 3 in Lakeland (Florida) where I did a lot of testing with it, and during a round of golf at Southport Springs Golf Club in Zephyrhills, FL. The results were the same, a great feeling putter that provides excellent distance control.

Off-center putts. Putts struck along the periphery of the Tour-S (heel and toe) resulted in no twisting at impact. Putts remained on-line and make no mistake. This is a forgiving putter design. It’s no wonder Justin Rose has seen the best putting stats during his career since switching to AXiS1 Golf.

If you’re looking for a putter that might genuinely help you make more putts, you may want to have a look into putters from AXiS1 Golf. The Tour-S has performed great through testing. A consistent roll and a solid-feeling strike every time. The stability through impact leads to predictable distance control. No twisting on strokes off of the heel or toe whether the stroke was manipulated or not. The Tour-S putter is a winner.