At the moment I’m sitting in Tampa International Airport awaiting my flight home… Well to Buffalo at least. I opted to stay at the airport tonight… Err last night and wondered what to do with my time. Having managed a short catnap on a circular couch I woke up with a renewed sense of vigor. So what to do in the next 6 hours until my flight? Seemed like a good time to write… And work on my putting stroke.

The trip itself was really nice. It afforded the opportunity to get some much-needed respite. For the first time in a really long time (and not since 2001) did I sit around by a pool and do nearly nothing. It felt great as I soaked in the Vitamin D from the sun and it really was an elixir for me it seemed. I planned to do a lot of fishing while here and meeting up with some friends that I haven’t seen since the PGA Show (Kay McMahon) and my friends from Tarpon Woods Golf Course. Who knew that my debit card not having my name present would spoil so many plans?

But the plan was also to golf and get lots of testing in. I definitely did that culminating yesterday when I played my first regulation 18 holes since August (Stroke in September). From a review perspective, I am fully confident that I can write a review on the Ben Hogan Golf Equalizer wedges that I received for testing and review. These wedges were somehow better than I thought they were. Smooth, crisp, accurate and ballflights that don’t balloon. They feel great around the green and perform even better. These wedges were in fact equalizers during my two rounds. Until I find something that could dethrone them I will go on the record and state that they are “the best wedges money can buy… for the money”. Mr. Hogan would be proud. 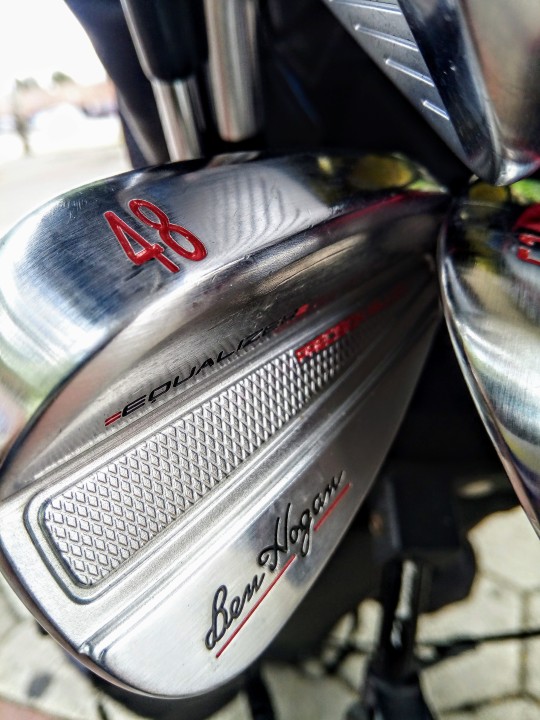 While down here I had the opportunity to test a cornucopia of 2019 golf ball offerings. The reality is that each one is pretty strong with the most surprising one being the e12 Speed from Bridgestone Golf. Maybe it was because I disliked the feel early on (putting). The e12 Speed is long. My experience with the TP5 and TP5x was very good and there’s a reason why this golf ball has been so popular. I’m really late to this party. I really think it’s a strength is in how it seems to fly a little lower than the rest while staying out of the wind. The Srixon Z Star is no slouch… If anything it cost me a couple of shots because it’s short game spin was so good. The DUO Professional is a golf ball that many golfers should look at. At $34.99 this golf ball offers big-time performance without a bulging price tag. In-depth reviews of all of these golf balls will be coming out soon. Maybe another round or two when I get home and I can start writing reviews. Instead of switching hole by hole… it’s time to play complete rounds.

I learned a lot about myself down here too. In particular about my game. I knew I missed playing during my hiatus but I had no idea how much that I REALLY missed it. Appreciation of the game has never fallen short on me but I appreciate the game of golf even more now than I did before. I have a renewed sense of excitement. I was satisfied to play at a small 9-hole Par 3 course my first day down in Florida. But the last day (today) was an entirely new level of satisfaction. I played a golf course called Sanlan Golf Course in Lakeland, Florida. This golf course was built on some of the prettiest lands I’ve seen a golf course built on. Totally void of houses it was just me, the course and the wildlife. I saw different birds of prey (some I had no idea what they were), I saw an Otter (she had pups somewhere according to staff) and just the vistas overlooking the lake. I couldn’t wipe the dopey smile off of my stupid face. Everything was just right out there. I’ll be doing a full review on this golf course in the future especially after talking to its Superintendent.

How did I play? Well, it doesn’t matter but for the record, I played very well. I ended shooting a -1 (70) which I am beyond happy with. For some reason, my golf swing just feels better than before. I had one drive over 300 yards but according to ShotScope V2 my average was about 260 yards. It’s not near where I was distance wise prior to the Stroke but it’s a process… In every sense of the word. I think it’s time to consider going up in loft to at least 10.5* and maybe consider going to a slightly softer shaft. Accuracy wasn’t a problem. Although those stats were padded by the Tour Edge Exotics EXS 4H that was steady in giving me a 220-yard average. I’ve already written a review on but this club is seemingly on auto-pilot. All it does is find the middle with a tight draw. Best hybrid I’ve played without any shred of doubt. I was into it out there today… I even made fist pumps on putts that I felt were “big”. A scramble save or birdie.

This guy is excited again.

Well, the time has come to kiss Florida good-bye. When the season is finished in November I’ll be right back down here. Goals and something to look forward to. As soon as I get home I’ll be getting back to work at the same golf course that I worked at last year. I’m excited again… And this is a great thing.