With three of the most significant tournaments at the top level of women’s golf taking part this week, women’s golf is getting a little more attention than usual, giving sports fans all over the world a variety of options to engage with.

With the first women’s Major of the year, the ANA Inspiration; the Jordan Mixed Open where two men’s Tours and the Ladies European Tour come together to compete on the same course for the same prize fund; and the debut for the Augusta National Women’s Amateur, all swinging into action this weekend, many people will get their first exposure to the game, and that is something that Elisa Gaudet, founder of Women’s Golf Day (WGD), knows can be a pivotal moment in recruiting the next generation of golfers.

“Through our work with Women’s Golf Day we know that if you give women and girls a great first experience of the game then they are likely to stay,” commented Gaudet. “I don’t think I’ve ever seen such a buzz around the women’s game in the 19 years I’ve been in the industry as I have in the weeks leading up to these three groundbreaking tournaments. I hope that by drawing some of the focus of the world’s media to these incredible athletes playing at the top level, they can inspire women and girls all over the world to pick up a club for the first time.”

If, as Gaudet suggests, the effect of these three tournaments coming together in one week is to expose a new audience to the women’s game and kindle an interest in participation, then the return of Women’s Golf Day on June 4th 2019 will provide the perfect opportunity for women and girls all over the world to take the next step, Gaudet continues.

“I love the ‘Think Globally – Act Locally’ campaign and believe that by having better access and exposure to the game, the more women and girls will want to take part. We’re obviously on a very different level to the women playing on Tour, but through WGD we’ve seen that when people have easy access to golf, have a fun first experience and then have a clear path into the game, they soon become the next generation of golfers. The success of WGD has been through industry collaboration and vision of governing bodies, industry leaders, golf clubs and charities coming together to celebrate new and existing women golfers and demonstrate they are important and welcome.”

In the past three years, WGD events have been held at over 900 venues in 52 countries and have delivered a golf experience to over 50,000 women and girls. This year’s event will be held on June 4th and will once again be a celebration of women and girls learning golf skills that last a lifetime and of being part of a larger global community. WGD has partnered with PLAY for P.I.N.K – BCRF (Breast Cancer Research Foundation) an important charity partner given breast cancer affects so many women around the world. We encourage the Women’s Golf Day events to have a charity component and raise awareness and funds for breast cancer and where possible work with Play for P.I.N.K – BCRF enabling them to continue their important work funding the world’s top researchers.

For anyone inspired by the events taking place this week or simply anyone who wants to get involved with a WGD event, keep an eye on the WGD social media at @womensgolfday and #WomensGolfDay and check into http://www.womensgolfday.com for news of new venues signing up around the world every day.

Any venue wishing to register to host an event for Women’s Golf Day 2019 should visit
http://www.womensgolfday.com and go to “Register a Location” And you don’t need to be a golf course to take part. Past venues include Golf clubs, PGA Superstore, Topgolf, Retail stores, Driving ranges – essentially anywhere you can swing a club! 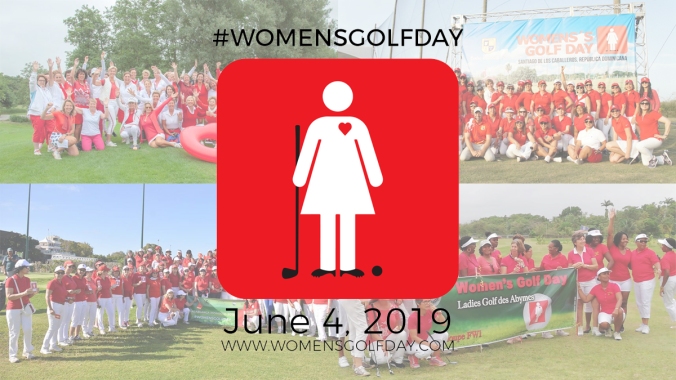 ABOUT WOMEN’S GOLF DAY
Women’s Golf Day (WGD) is a global golf initiative launched in 2016 to introduce women of all ages to the game and encourage existing female golfers to “tee it up” in a fun and highly inclusive environment. The one day, four-hour event has now taken place in 900 locations in 52 countries since its inception and has introduced thousands of new golfers to the sport while transcending language, culture, religion, and race to celebrate golf, women, and community. WGD created an incredible global community in three years and has the support of almost every major golfing governing body and organization. WGD’s primary hashtag “We are thrilled to have this group of talented athletes join Callaway Apparel as brand ambassadors,” said Tim Reed, SVP of Global Sports Marketing at Callaway Golf. “This dynamic group is a perfect combination of established veterans and young stars on the rise and we look forward to supporting them as they perform on golf’s biggest stages.”

The new members of Team Callaway include:

●       Retief Goosen – This two-time Major Champion owns 36 career wins worldwide and has spent over 250 weeks in the Top 10 of the Official World Golf Rankings. Later this year, he will be inducted into the World Golf Hall of Fame as a part of the Class of 2019.

●       Brice Garnett – Winner of the 2018 Corales Puntacana Resort and Club Championship. He is also a multiple winner on the Web.Com Tour and former NCAA Division II All-American.

●       Cody Gribble – Winner of the 2015 Sanderson Farms Championship and a member of the University of Texas 2012 National Championship team. Cody will be wearing Callaway TOUR AUTHENTIC in 2019.

●       Steven Brown – The second-year European Tour member has earned three professional wins and was a member of the 2011 GB&I Walker Cup team.

●       Rico Hoey – A three-time All-American at USC and two time Palmer Cup member will be competing in his first full season on the Web.Com Tour in 2019.

●       Steven Ihm – The University of Iowa grad will be competing on his first full season on the Web.com Tour. He is a former winner of the prestigious 2013 Sunnehanna Amateur.

●       Matthew NeSmith – The Web.Com Tour rookie was a two-time All American and the winningest golfer in University of South Carolina history.

●       Carlota Ciganda – The 15th ranked player in the world has earned six career wins, played on three Solheim Cup teams and was the LET Rookie of the Year.

●       Emma Talley – A past winner on the Symetra Tour, the four-time All-American at the University of Alabama is one of only five women to win both the NCAA Individual Championship (2015) and U.S. Women’s Amateur (2013).

●       Cheyenne Knight – This LPGA Tour rookie was an All-American all three years she spent at the University of Alabama and earned the 2017 SEC Player of the Year.

Callaway® Apparel men’s and women’s golf apparel and activewear is licensed and developed by Perry Ellis International, a global leader in fashion apparel. For more information on the new ambassadors, please visit: https://www.callawayapparel.com/team.html

Innovative. Performance-Driven. Authentic. Callaway® Apparel is the ultimate combination of golf authenticity and classic style. Always innovative, always an outperformer. Because apparel that offers quality, performance, functionality and fit is as important to both men and women golfers as the equipment they use. Callaway Apparel is designed for those who love the game of golf. It represents where the game has been, and where the game is going.  Learn more about Callaway Apparel at  www.callawayapparel.com and follow on Facebook, Instagram, and YouTube.

Perry Ellis International, Inc. is a leading designer, distributor, and licensor of a broad line of high-quality men’s and women’s apparel, accessories and fragrances. The company’s collection of dress and casual shirts, golf sportswear, sweaters, dress pants, casual pants and shorts, jeans wear, active wear, dresses and men’s and women’s swimwear is available through all major levels of retail distribution. The company, through its wholly owned subsidiaries, owns a portfolio of nationally and internationally recognized brands, including: Perry Ellis®, An Original Penguin® by Munsingwear®, Laundry by Shelli Segal®, Rafaella®, Cubavera®, Ben Hogan®, Savane®, Grand Slam®, John Henry®, Manhattan®, Axist® and Farah®. The company enhances its roster of brands by licensing trademarks from third parties, including Nike® for swimwear, and Callaway®, PGA TOUR®, and Jack Nicklaus® for golf apparel and Guy Harvey® for performance fishing and resort wear.  Additional information on the company is available at http://www.pery.com.