Tour Edge Golf has been on fire over the last two years with its Exotics EXS range of products. The EXS driver of 2019 had a lot of great things going for it in 2019, while it offered a ton of “bang for the golfer buck” I felt that it came up just a little bit short in one area. The acoustics department.

Not to short-change this review, Tour Edge Golf’s R&D team did very well to improve on that minor issue as the product cycle turned to 2020. This was something that I discovered way back in January at the PGA Show Demo Day as the Tour Edge Exotics EXS 220 driver won my annual Teezy Award for the “Top Driver” category.

That was then but this is now. How would the EXS 220 driver perform outside of the perfect conditions of a vast demo day range? How would it perform in real-world situations where tight fairways are lined with trees, fescue, and hazards? A place where misses are more important than that of your best swings. Well, look no further, because that’s what this review is for. Can the EXS 220 driver live up to its billing as the Teezy Award winner? The answer is here.

Triple Carbon Tech is a key technology employed in the Exotics EXS 220 driver.

When it comes to the Exotics EXS 220 range of products, Tour Edge Golf utilizes the tagline “Pound for Pound… Nothing Comes Close”. And in my opinion, they aren’t wrong. For the dollar, you get a ton of technology packed into these clubs. As much as the competitors if not more, for much less. So, let’s have a quick look at some of the technology poured into the Exotics EXS 220 driver.

Sound Diffusion Bar (S.D. Bar) – Having already alluded to the fact that the acoustics have been improved from 2019, Tour Edge R&D placed the S.D. Bar inside the clubhead to fine tune the acoustics. A similar idea is employed in the music industry to enhance the richness of sound in concert halls, studios etc.

SpeedTested Shafts – Through robot testing, a robot known as TED (Tour Edge Developmental) the team at Tour Edge was able to determine the best performing shaft for every flex and swing speed. Note, these shafts serve as a terrific baseline. By going to a fitter you might be able to find a better shaft for your needs.

8-1-1 Titanium Face – The lower density titanium face allows for weight to be repositioned elsewhere. Important from an engineering standpoint. Where every gram counts. The end result achieved in doing so,  the M.O.I. is maximized.

Max MOI Design – What a perfect segue! Speaking of M.O.I. (Moment Of Inertia) The EXS 220 driver is designed with the maximum M.O.I. possible. An elongated footprint (front to back) and a 9-gram backweight contribute to a driver that has one of the highest M.O.I. ratings in drivers ever manufactured.

Through my discussions with Vice President of Marketing Jon Claffey (whom I give my many thanks to for this opportunity) I decided to test an EXS 220 driver in 9.5º of loft.

The SpeedTested shaft that I ended up going with was the formidable Project X HAZRDUS Smoke Yellow 60 in Stiff flex which weighs in at 64-grams. I opted to go with the 9.5º lofted head because it gave my flexibility to experiment with my launch conditions. Through the use of their excellent adjustable hosel (which adjusts +/- 2º) I was able to go down to 7.5º or go as high as 11.5º. I admit that I’ve experimented with the hosel settings a ton, however just recently, I ultimately decided to run with the U- setting, which is also a slightly upright lie angle and 8.5º of loft. My eye favours this launch condition and with the winds of the Great Lakes, it also provides a penetrating ballflight. 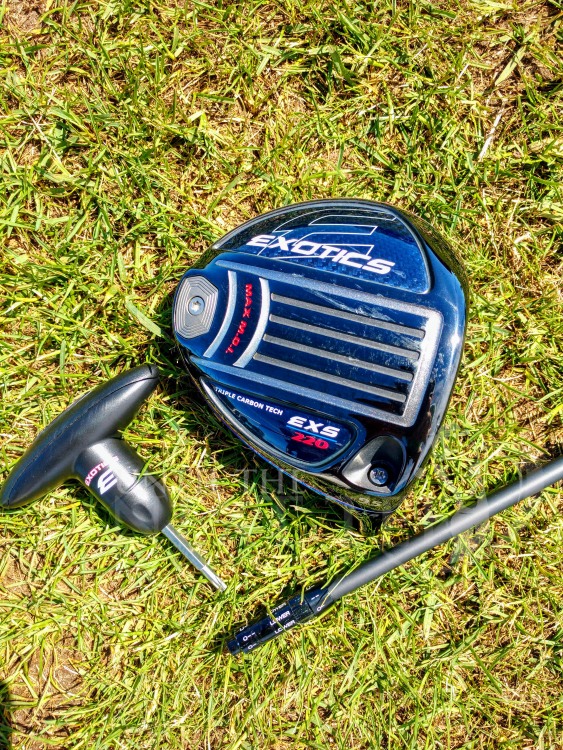 I won’t mince words. The Exotics EXS 220 driver is without any doubt in my mind the most forgiving driver that I’ve played. I’m not shy about admitting that I’ve had some struggles with my swing this year. Much of it having to do with hitting into a net during isolation and seamlessly developing bad habits. My earlier range sessions with the Exotics EXS 220 were, shall we say, difficult. Often, I was hitting the golf ball low on the face. Yet, the results were surprisingly good. So good in fact, that I felt rhat I didn’t deserve the result of drives. My drives still went mostly straight with nary a cut. Strikes low off of the face did see a loss of some yardage but the misses were straight and very much acceptable.

As the season has progressed, I have put those swing woes behind me, or at least mostly behind me. Sticking with the forgiveness for just a little longer, I have hit only one tee shot out of bounds costing me strokes off of the tee. That was no fault of the EXS 220, that was the individual swinging it. I hit a massive block into the trees down the right side. The EXS 220 is forgiving and a straight-shooter.

A sound bite sums up the acoustics of the Exotics EXS 220 driver. As mentioned, the difference is big from 2019’s offering versus the EXS 220. I love the sound more now, than I did in January in Orlando. The video clip below demonstrates it quite well. Of course, off-centre strikes won’t emit the same acoustics.

Distance. I want to say that this is one of the longer drivers that I’ve played. But I also have to admit something as well. I might have erred on the shaft, thus robbing me of yards. During this season, I’ve fought arthritis, gout and other ailments so I haven’t been able to load the shaft like I typically do nor generate speed. So maybe, the shaft that I selected was too stout for me. Had I suspected that was going to happen, I would have actually chosen a lighter-weight Regular flex or even Senior flex shaft (the latter to generate more kick). But that said, the EXS 220 driver is long.

The ball jumps off of the face like it did and I think that we can thank the Diamond Face Tech for that. Diamonds aren’t only a “girl’s best friend” as they are also (in this case) a golfer’s best friend as well. The EXS 220 has been a low-spinning driver that delivers pop and forgiveness. The golf ball has had zero tendency to balloon during my time on the golf course with it and I cannot say enough about it.

I had a couple of quasi “Demo Days” during range sessions (yes, hand sanitizer and social distancing was achieved) and every golfer that put in into their hands was impressed with some having eye-popping reactions. Moreover, a student of my coach (Ben I think is 16-18) and was routinely hittig balls into the net, with Srixon range balls into the wind. The Exotics EXS 220 was longer than his gamer. In the right hands, the Exotics EXS 220 is a beast!

With a price tag of $349.99 USD, the Exotics EXS 220 from driver offers golfers a lot of club for the price. I refuse to use the term “value driver” because this driver is as premium as the competitors in a very competive part of the golf indistry. I feel that the term “value” cheapens it.

Even a sub-standard strike like this nets satisfactory reults. EXS 220. So forgiving.

It’s plenty long and coupled with the forgiveness, it makes it seem almost longer in a way. Tight dispersion and finding the middle is easy. The Exotics EXS 220 is very stable through impact and there is no doubt that this is a high M.O.I. head.

I can almost assure you that this driver will save you strokes off the tee. If you’re in the market for a new driver in 2020, the Exotics EXS 220 should be on you radar. Long, forgiving, and a fraction of the cost of some others on the market. All products from Tour Edge Exotics are hand assembled in te U.S.A. and come with a Lifetime Warranty.

. Please head over to Tour Edge Exotics for more information.