As I sit here in what seems to be the “Dog Days of Summer” with sweltering heat and nary a breath of wind, I have a question for all of you. I think that the question I pose is a relatively fair one, and it’s a question that I’m asking out of nothing more than simple idle curiosity. So, here goes.

When you go to the driving range, do you want to be left alone and just focus on yourself, or do you welcome conversation about the mechanics of the golf swing?

I ask because the following story is a situation that arose the other day during a “focused” session at a nearby facility (Brock Golf Course).

Lately, since receiving a new set of SUB 70 699 Pro irons (that review here) my practice approach has taken on a renewed intensity. What some of you may not realize is that I took a kick at the proverbial can of playing professionally in some Mini-Tour events a few years ago. The timing was as poor as my results (see embarrassing). At the time, I was going through a complete swing reconstruction, however, I have no regrets because it got me valuable tournament experience (I had none prior) and as it turns out, I inadvertently invested in Canada’s Michael Gligic (while playing on The Great Lakes Tour). Too bad, my health got in the way for good measure. So here I am, thinking about it once again. I turn 50 in less than two years and with it, I get the equivalent of a “sort of” golf vasectomy. So, I’m thinking about playing in competition again and I’m working towards it in every way. 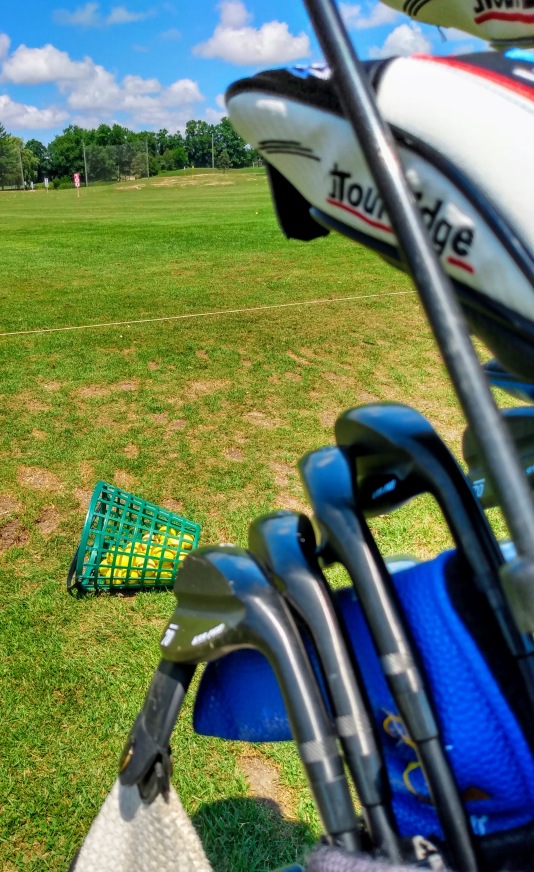 Every now and again, I fall into a trap of working on things where I lose my sense of feel as it relates to the golf swing. I wrote an article earlier this season in which, to sum up, I screwed myself over getting too mechanical while practicing in isolation. It took a while to break the habits in my swing that I suddenly had acquired. I had a serious issue with hitting blocks. A shot shape that I’ve never had, and then shortly thereafter I had an issue with hitting pulls as I was coming out of “the blocks” and the pulls, those were eerie Hell! It grossed me out. Since then, I have rectified both misses and my sessions have gone extremely well. Phew! (insert wiping off brow here).

It feels great, and in a way, it feels like I’m in cruise control. My typical shot shape has returned, straight to baby draw. The shot shape that I know and trust. Which gets me to the point of this article.

The other day I went into the Pro Shop at Brock Golf Course, purchased my bucket of balls, found some grass in the hitting area, and dropped off my balls and golf bag there. Typically, I spend time on the putting green working on my putting stroke, and then head over to the chipping/pitching area to work on my short game. This day was no different. Like I said, my focus has suddenly changed. Now that I’m sitting here, thinking about it. My focus began to change on the back nine during a recent round with a friend. I felt the competitive juices start to flow within myself and rise to the surface.

Feeling the flow. About to ride the bronco.

As I was working on my short-game, I noticed that a woman was watching me closely from the range. Upon finishing up my short-game practice I slowly meandered over to where my golf bag awaited and standing beside my golf bag was… the woman. We exchanged pleasantries and she sat down. I worked with my Orange Whip and she asked if it was an Orange Whip Trainer to which I responded “Yes ma’am, it is! It’s been in my bag for 5 or 6 years”. “May I see it?” sure, why not? I have hand sanitizer in the golf bag. So now, I’m engaged in an ongoing conversation. Honestly, I didn’t mind. But then the conversation took a turn.

From out of nowhere, she starts talking about the golf swing after I make a few swings with my wedge, settling into my routine. She starts talking about a whole bunch of technical thoughts, about seven of them (my head was spinning after the third) and she’s demonstrating them sounding like a robotic parrot. Demonstrating all sorts of angles and why they’re happening, she explained that she’s been struggling with her swing. In the interest of transparency, I feel that I should say that while I was practicing my short-game, I casually glanced over and observed her making swings. It was a series of thins and fats. I realized that she was looking for some free swing tips, and I vaguely recollected her from last year too. It was the pitch of her voice that stood out.

Realizing that she was likely working with someone (I never, ever talk or help someone that’s already working with another instructor) I asked her “So, who do you work with?” She ignored the question and continued with technical speak about the golf swing without missing a beat or taking a breath. So I asked her again, “Who do you work with?” she finally responds. “Why do you ask?” So I explained to her, “I ask because, you ma’am, are way too mechanical for your own good”. An allegation that she denied and debunked saying nothing more than “No” and walked away. As she walked away, I said to her “Have a fantastic day!” That was the end of the conversation. By the way, I’m doing this as I’m working through my routine making swings.

I don’t mind talking on the range, and I don’t mind discussing the golf swing. But if you’re going to fill my head or anyone else’s with swing thoughts and not be open to hearing what others think.  Keep them to yourself and leave me or others the heck alone. After all, I’m working here.

One thought on “I’m Working Here”