I had the opportunity to roll a lot of different putters while down in Florida for the PGA Show. The reality is that there’s almost too many to choose from. A company like Odyssey Golf, for example, has a cornucopia of designs which is good. Variety is the spice of life and it almost guarantees that anybody can find a putter in their stable that works for them.

When it came to the “Top Putter” category judging was based on the following with a maximum of 10 points being allocated for each of the following.

This is a “free for all” category with mallets and blades competing head to head against each other. Here are your 2020 Teezy Award medal winners for 2020.

I recently wrote a “First Impressions” Review on this putter. Prior to the PGA Show, I didn’t even know that this putter was in existence. I found out at Demo Day and my rolls there made a very long-lasting first impression on me. The Wingman is a mini-mallet and is an excellent performer. The feel is near-perfect (in my opinion) and much of that has to do with the Surlyn insert. The designers at Tour Edge went above and beyond in finding the correct durometer hardness for the insert. A combination of “wings” and weights towards the back of the Wingman make this a very forgiving putter boasting a high MOI (resistance to twisting). I struck putts off of the heel and toe and I observed no drop-off in terms of performance. The feel was still stable and I didn’t feel any discernible difference. Their “Lock-On Technology” ensures that the lie angle is correct ensuring a square face every time at address. The roll is very true thanks in part to the “MicroGroove Technology” in the face. It just helps to get the ball rolling without skid. Oh, the price tag. It’s very attractive too!! $199.99 USD 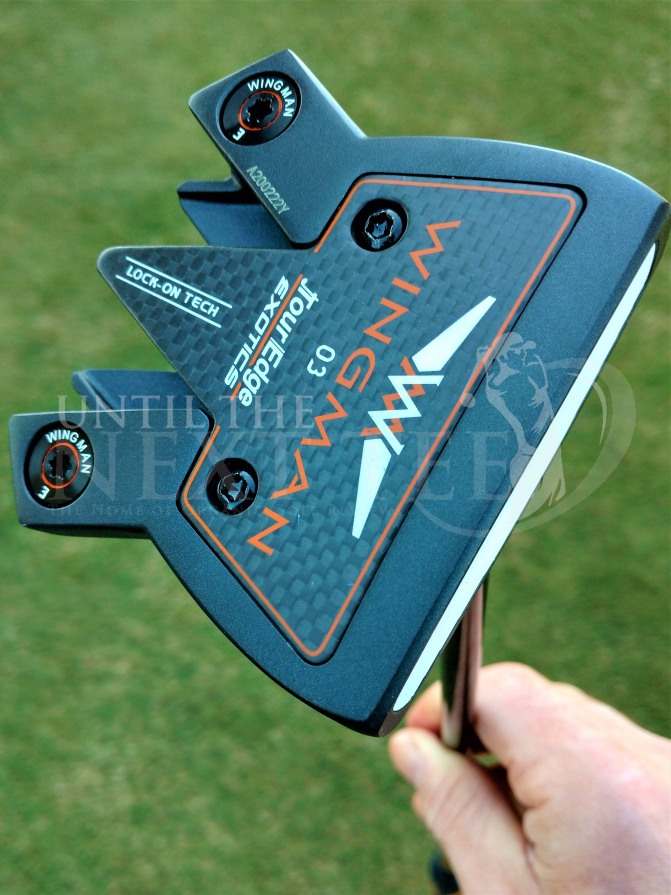 It’s a brand of putter that may not be a household name. It’s a stand-alone putter meaning, it stands up by itself so you can stand behind the putter and golf ball to line up your putts. Golf fans on social media, you might have seen some “flack” about this putter when former Atlanta Braves pitcher John Smoltz won the “Celebrity Division” during the LPGA Tour Diamond Resorts Tournament of Champions. The question was asked. “Is it legal?”. Yes, it’s legal otherwise, Ernie Els wouldn’t be using it on the Champions Tour where he just secured his first Champions Tour victory. The R1-J Blade Slant Neck unlike other stand-alone putters that I’ve used this blade-style stand-alone putter isn’t excessively heavy. It has a headweight of 395-grams which I am a fan of. Constructed from anodized aluminum that is CNC machined the golf ball feels soft off of the face which lacks an insert. A round grip (50-grams) and a carbon-fiber shaft help to keep the overall weight down. When I first held it in my hand I was “a little weirded out” because I expected the R1-J Slant Neck to be heavier. In-hand it feels much lighter than you may think. I like the looks of the red-headed blade and how the ball sets up at address. An Ultra-Low Balance Point contributes to the feel/stability of the putter. When I didn’t use the stand-alone feature I missed on the low side. When I used the stand-alone feature I couldn’t miss with this putter.  $499.99 USD Here’s a putter company that I never knew that existed. Black Hole Putters were unveiled at the 2020 PGA Show. I only found these putters by happenstance walking the show floor. I passed by their booth on the way from one appointment to another. This putter could really be the “Hidden Gem” of the 2020 PGA Show for me. The Black Hole Blade Editon putter comes as a set. A set you ask?! Yes, because you have two putters. For practice purposes, one putter comes with infrared lasers. By pressing down a button in the grip a laser beam shows up and tells you a couple of things. Maybe you’ve de-lofted or added too much loft to your putter at address. It’ll help you in training yourself to have the correct lie angle. Secondly, the lasers act as “railroad tracks” reinforcing your line on the practice green. You could use it on the course during practice rounds. The non-laser version feels exactly like the “trainer” version. This blade feels nice in the hands, better through the impact zone. For a blade-style putter, I felt that there is a pretty High MOI seeing that there was not much difference in the way of pure strike vs off-center strikes. I asked about the MOI numbers and at the time, they (Owner Alan Johnson) stated that they were not sure. A terrific putter!! $399.99 USD per set 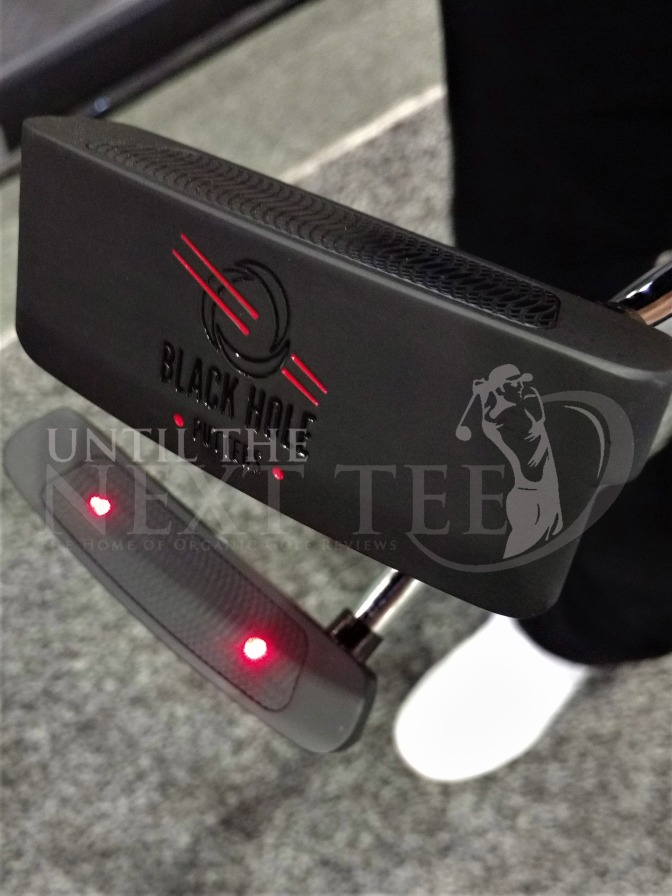