Say what you will. Love him or hate him, Bryson DeChambeau has had consecutive Top-5 finishes two weeks in a row. DeChambeau finished with a share of 5th Place at the Genesis Open and this week lost by one at the WGC-Mexico Championship. SIK Putters playing a vital role.

Thanks to Joe Wieczorek from The Media Group for sharing this release. Please read for more details on putters from SIK Golf (Study In Kinematics).

Bryson DeChambeau, commonly referred to as “The Professor” and “The Mad Scientist”, is probably best known for his unorthodox set of irons that are all the same length, but what most people don’t know is that he’s captured all five of his PGA TOUR victories, and in excess of $14 Million Dollars in earnings, using a SIK putter! 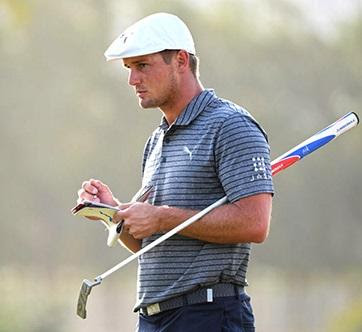 DeChambeau fired rounds of 68, 70, 69 and 69 to finish at 8 under par for the tournament and grab his second Top 10 of the 2020 season as well as a paycheck for $318,990.00. He is currently ranked 16th in The Official World Golf Rankings.
“We’d like to congratulate Bryson on his Top 5 at The Genesis Invitational,” said, SIK Golf’s COO, Marc Cerio. “Bryson found out about SIK’s Descending Loft Technology in his rookie season on the PGA Tour. When he saw the data on the Quintic Ball Roll System with a SIK putter in his hands, he was instantly hooked. We’re very proud to have him on our Staff and we’re excited to see what the rest of the 2020 season holds for him.”
About SIK Golf’s Descending Loft Technology™
Descending Loft Technology™ is SIK Golf’s patented putter face technology. They have four flat surfaces that are milled into their putter face. Each plane descends in loft by 1° from the top of the face to the bottom of the face. When your shaft is pressed at impact the ball contact will be higher on the face, same is true in reverse. DLT delivers consistent launch angles from putt to putt which lead to more consistent and predictable rolls.
The DLT planar face is superiorly unique amongst its’ peers. Custom putters from SIK Golf not only ensure individualization, they truly “Change the Way You Roll”. It is a literal game-changer for players and duffers alike.
SIK Golf’s mission is to make you a better putter, not just sell you one.
For more information about SIK Golf, visit www.sikgolf.com.