Sequels. So often they can be very disappointing. For example, Caddyshack vs Caddyshack 2 is an example of a sequel that didn’t quite live up to the original.

The biggest sequel that I was curious to see at the 2020 PGA Show Demo Day was that of Tour Edge Golf. What would the Batavia, Illinois based company do for an encore? 2019 proved to be Tour Edge Golf’s most successful year ever. A development that didn’t surprise me at all. The EXS range of products was fantastic, the CBX 119 metalwoods were played by several Champions Tour players, and these were products that offered plenty of “bang for the golfer buck”. I made the prediction here November 2018 that the Tour Edge Exotics EXS range was going to be a serious “sleeper” among golf consumers. When you have a highly successful range of products, sometimes it’s hard to repeat. Would that be the case in 2020?

When pictures and information emerged about the Tour Edge Golf Exotics EXS 220 metalwoods, I had a couple of initial thoughts.

So let’s have a look to see if the EXS 220 driver would live up to the pressure of being the heir to the Teezy Award Finalist EXS driver (Finished in 3rd). 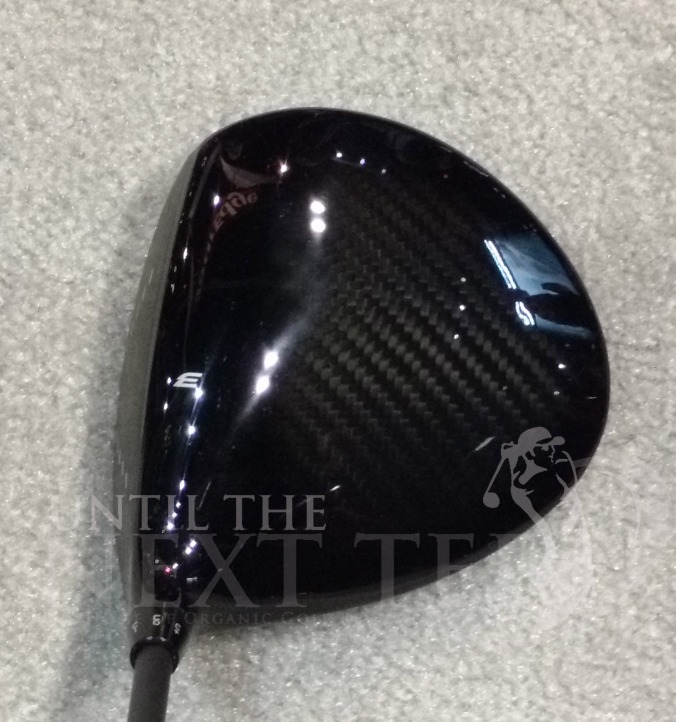 With all of the technical jargon taken care of, the time has come to get down to business. How did the EXS 220 perform and did it live up to my expectations? The conditions were tough on Demo Day, and I was happy about it. The wind was cold and blew left to right. Perfect for knocking the ball out of the air.

First of all, from an aesthetic point of view, the Exotics EXS 220 is a great-looking driver. The carbon fiber crown really stands out (refer to the above pic) and it’s clean (other than the “E” alignment aid). Flipping the club over, the sole features the “SlipStream Sole” which helps with aerodynamics and potential increases in clubhead speed. But, I really like the combination of the blue and red accenting with the silver of the adjustable weight and the carbon fiber weave. Lastly, I like the simple branding out towards the mid-section placed between the toe and the trailing edge.

I put the SpeedTested shaft to work. In my case, I opted for the stiff flex Project X HZRDUS Smoke Yellow in 60-grams. I swing above 95 mph so that was the obvious choice. To that end, in my case, the shaft worked out really well. The shaft was able to keep up with me and there was zero evidence of a ballooning ballflight. So it was a good choice. However, I learned something about myself later during Demo Day. For some reason, heavier more stout shafts were working better for me. I didn’t think I was an X-flex any longer. Maybe, I should have tried an X-flex? Either way, my dispersion was great with EXS 220 paired with the stiff PX HZRDUS Smoke Yellow.

The ball jumps off of the face and there was one thing that I noticed in particular. The improved acoustics. If 2019s EXS had an issue it might have been the sound at impact. Tour Edge Golf engineers did great in placing the Sound Diffusion Bar in the head. The placement is set in the head, not quite halfway back. The acoustics are ear-pleasing and are what I would describe as “authoritative”. When you put a good swing on with the EXS 220 driver… You know it. You hear it, see it and feel it.

The launch with the EXS 220 was perfect in the stock 9.5* set-up. The ballflight penetrated in those conditions and the ball just seemed to carry. Remember that this was a cold, knock-down wind. Perhaps, there is stock in the “Diamond Face” technology.

The EXS 220 driver is plenty forgiving too. As it should be with the MOI numbers that are associated with it. Toe and heel strikes did not result in horrible misses or spinny, ballooning shots.

The EXS 220 driver is a definite upgrade and improvement over 2019s EXS. It’s a bonafide finalist and contender for the “Top Driver” Teezy Award. Long, straight, low-spinning and forgiving. I’d recommend any golfer looking for a driver in 2020 to have a look at and make swings with the EXS 220. There is a ton of technology packed into this driver and the SpeedTested shaft pairing worked for me. Everyone is different though. What works for me or your playing partner, may not work for you. But, what a great baseline to start with.

The retail of the EXS 220 is $349.99. That’s $50 more than last year’s EXS and it’s worth it. Even at this price, it’s much lower than several competitors in the industry. You will never see me refer to EXS or EXS 220 as a “value” driver. It’s premium… Period! Tour Edge Golf is right. “Pound for pound, Nothing else comes close”.