The PGA Show is great! I’ve attended every year for the last 8 years and it’s a place where you never know who you’re going to meet or run into. In the past, I’ve met greats like the World Golf Hall of Fame Inductees like the legendary Nancy Lopez, John Daly, Craig Stadler, David Leadbetter and Canadian phenom of the LPGA Tour Brooke Henderson.

In 2020, it was no different. I met a couple of other World Golf Hall of Famers and one other legend from a different sport altogether. This gentleman, is a golf professional in Arizona, is an NHL Hall of Fame Member and owns 5 Stanley Cup rings. When I played hockey, I wore #31 because of him because I idolized him. I also wore my “trapper” (catching glove) on my right hand just like him too. This legend is Grant Fuhr.

If you would have told me that I would meet my idol at the 2020 PGA Show of all places I would have told you that you were criminally insane. (I have two others, Mr. Jack Nicklaus and Mr. Arnold Palmer). We talked hockey, me going all fanboy and profusely apologizing for doing so and of course Srixon/Cleveland Golf. What a down to- salt of the Earth kind of guy. It was sort of funny how it happened, I saw a guy that I thought that I recognized. So I did a double-take. I thought to myself “Jeez, that looks like Grant Fuhr”. Nah, it can’t be. So I take a third look and read the badge. Holy Heck! Grant Fuhr!!! No freaking way!

On the show floor, I was wandering around on Wednesday. Towards the end of the day, I found myself around the COBRA Golf booth. And who was there? The Shark… Greg Norman. Somehow, I managed to have the chance to meet him for a pic and he was gracious and patient as the COBRA PUMA rep struggled with my phone to take a pic. So he was patient and allowed a selfie with him. From one fly fisher to another I asked him what his favourite species to catch was. Unfortunately, I can’t remember what it was.

Wednesday, I also visited the Athalonz booth. Have you ever thought of a pair of shoes as a piece of golf equipment? Well, Athalonz is just that. More on these shoes at a later time. While there, I received a hot tip that Bernhard Langer was going to be there on Thursday. While I didn’t necessarily plan on getting to the Athalonz booth that day an appointment led me right past it. That was when I saw Mr. Langer. Honestly, I thought that he was much taller. A legend. 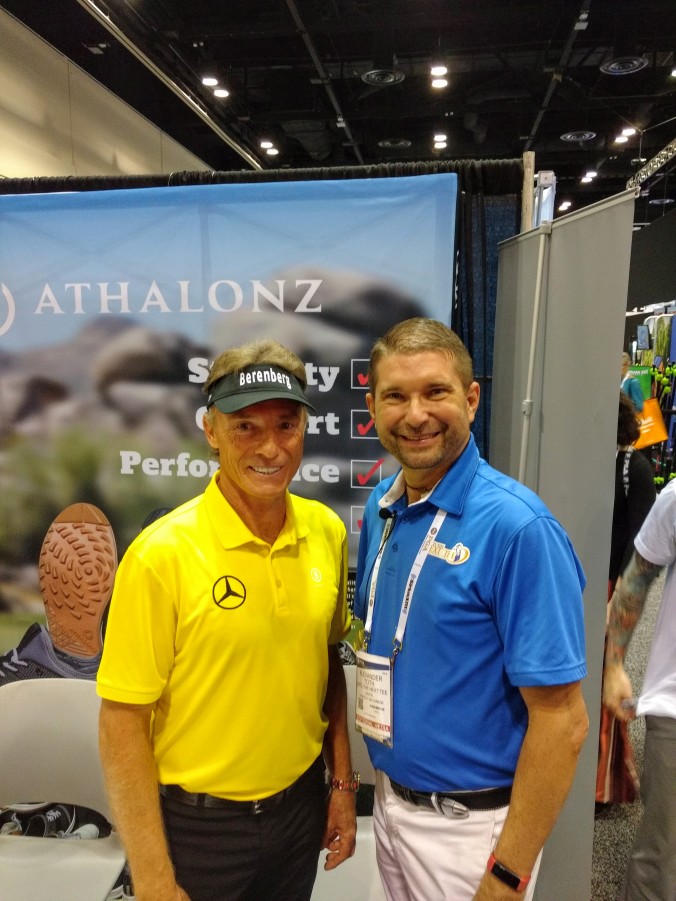 True story. My wife Crystal met Jan Stephenson in the International Network of Golf room last year. I have wanted to meet Jan for a long time so when Crystal met her and I failed to see her wave me over I was bummed. Crystal told me that she was a total sweetheart. So this year, even though it didn’t happen at the PGA Show it happened on the same trip. I met Jan, and she is amazing! Such a doll.

All legends. And to all of them, thanks so much for taking out some time from your busy days to let this humble writer (and fan) harass you for a few moments.