I have a riddle for you.

When it comes to golf equipment. What do professional golfers Marina Alex, Lexi Thompson and Cristie Kerr from the LPGA TOUR, Bryson DeChambeau, Rickie Fowler, Tiger Woods and Hall of Famer Jack Nicklaus all have in common? Have a guess? Well, if you said that they all have used SST PUREing than you are 100% correct.

My next question is this. Have you heard of SST PUREing? If not, please allow me a short time to explain it to you. SST PUREing is a shaft alignment system that’s designed to help golfers of all skill levels get better. PURE is “PURE Shaft Alignment System finds the irregularities that exist in every shaft and identifies your shaft’s most stable bending plane or Neutral-Axis™. When the club is assembled with the shaft in this orientation, the result is greatly improved performance and consistency across every club”. Did you know that a golf shaft oscillates throughout the course of a golf swing. From takeaway to thru-impact.

Due to the irregular qualities of a golf shaft being taken out as a factor golfers that have used SST PUREing technology have noticed tighter dispersion (17.5 yards worth) and that they’re longer by 7 yards on every club. This observation was formed through testing by a third-party testing company involving golfers and differing skill levels. Is SST PUREing new?

The answer is in fact no. Believe it or not, I first saw or heard of shaft PUREing while I was playing on a Canadian Mini-Tour called The Great Lakes Tour. At the time (2012), there was a mobile trailer (called MobileONE) that was run by a local gentleman (Grant Tayler) who also owned a golf shop that built custom golf clubs. He used this technology. At the time, I wasn’t educated in golf equipment and technology as I am today but I was familiar with SST PUREing through a brief discussion with Mr. Tayler and Jeff Roy (PGA of Canada).

It was at a later time while practicing in a Niagara Falls sports dome (Niagara Falls Sportsplex) that I had my first experience with a golf club that utilized SST PUREing. It was Mr. Roy’s Titleist driver (910 I believe) shafted with an Oban Devotion shaft (shaft is ironically pictured in the video above). In the dome, it’s really hard to gauge anything but this dome had 68 yards of free flight. I swear, to this day, that I could feel a difference. Mostly, at impact. Strikes were off of the sweet spot every time. It was something that I stated to Mr. Roy and my coach. ven though my irons were “blueprinted” I never moved on PUREing. It wasn’t financially feasible for me.

Well, as it turns out Club Champion Golf the ever-expanding golf club fitter has expanded its services by offering SST PUREing free for those ordering custom-built woods. Club Champion Golf recently purchased SST Pure (http://sstpure.com/). Usually, the cost for the service is $30 USD per club. For more details please see the press release as shared by Nick Sherburne. Mr. Sherburne is the Founder of Club Champion Golf.

For more details, please see the article below as shared by Mr. Sherburne.

Shaft technology leads to consistency, accuracy when applied to shafts

Is golf’s best technology a secret? Most golfers aren’t aware of the SST PUREing process, or the benefits that come with a set of PUREd shafts. Amateur golfers are constantly seeking out the latest and greatest equipment as seen on the PGA Tour, so why aren’t they flocking to the technology that PGA Tour professionals have trusted for over 15 years – the same technology that’s helped win over $2 billion?

It’s a good question, and one that has a layered answer. Nick Sherburne, co-founder of Club Champion, the nation’s premier club fitter and builder and SST Licensee for 20 years, and Matt Saternus, founder of Plugged In Golf, set out to understand why more golfers aren’t playing PUREd shafts, and to test the technology’s claim of game improvement.

“Knowing what I know from years in this industry, I’m baffled that more golfers aren’t aware of SST PURE,” said Sherburne. “There’s a reason that Club Champion recommends all shafts be PUREd, and even includes it free with our custom built woods – a $30 value. Golfers who truly want consistency should start with PUREd shafts.”

Awareness is the first layer in answering the question above; you can’t seek something out if you don’t know it exists. So what is SST PURE? It’s important to understand that golf shafts are not manufactured perfectly straight or perfectly round. Irregularities can cause problems when the shaft twists and bends during a swing. SST PURE Shaft Alignment identifies the most stable bending plane or “neutral-axis”, to allow for the club head to be installed in the proper orientation.

But does that alignment really matter in the grand scheme of your golf game? That’s the second layer to answering our question, and it’s something that Saternus explored in a previous edition of Golf Myths Unplugged via Plugged In Golf. Saternus tested whether PUREing delivers measurable benefits or if it’s just another placebo.

“For this test, we used two seemingly identical six irons,” he explained. “The clubs had the same head, shaft, grip, loft, lie, length, swing weight and total weight. The only difference was that one shaft had been SST PUREd and the other had not.” All of the testing was done at Club Champion in a controlled environment.

The test consisted of seven golfers, whose handicaps ranged from the mid-teens to scratch. Each player hit ten shots with the PUREd six-iron and ten shots with a non-PUREd club without knowing which was which. The test concluded that the PUREd shafts led to significant distance increases. On average, the testers gained over seven yards of total distance with the PUREd iron compared to the non-PUREd club. That’s nearly a full club of extra distance despite the clubs having the same loft. The greater distance came largely as a result of greater club head speed, ball speed and smash factor. Players swung the PUREd club nearly 1 MPH faster and generated an extra 2.8 MPH of ball speed. 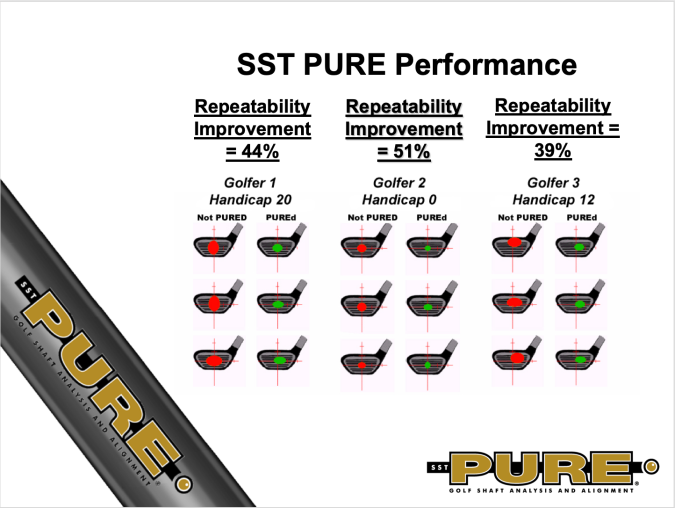 The study also concluded that PUREing does, in fact, boost accuracy. On average, the test group was 2.2 yards closer to the center line with the PUREd six iron. That’s the difference between a makeable birdie putt and a challenging two-putt. On the PGA Tour, that would be the difference between being #1 in proximity to the hole and being 91st.

PUREing helped players land their shots nearer the centerline and also helped to narrow their dispersion pattern. The average distance between players’ farthest right and farthest left shots was 2.1 yards smaller with the PUREd iron than with the non-PUREd iron. To sum it up, Saternus wrote, “The SST PUREing process is no placebo. It is one of the most impactful technologies that we’ve ever tested.”