Forgiveness. By definition, the term means “the action or process of forgiving or being forgiven.” When it comes to the game of golf and the equipment that we use, this term is most often associated with drivers and iron sets. But what about putters? Could golfers benefit from a little bit of help from the club that we use most often during a round of golf? Lateral Line Putters definitely thinks so.

Before continuing with this review, I would like to thank John Ambrose, the great mind behind Lateral Line putters. In the past, I’ve had the opportunity to work with Mr. Ambrose where I reviewed the original MOI MAXX putter in 2017. That was a putter that garnered praise from me, so when he reached out to me about a new putter that he was releasing there was no way that I could refuse. 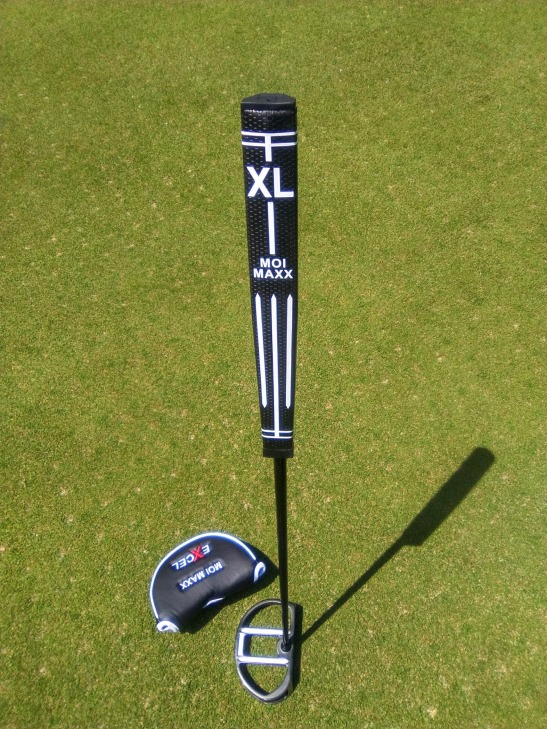 If you look back at that review (MOI MAXX review here) you might recollect a few things. Most notably, however, is the fact that it’s an oversized, overweight mallet putter. That putter measured 6.25″ heel to toe and it’s head weight was a staggering 620 grams.  As far as the man behind the putters himself Mr. Ambrose is a retired Continental/United Airlines pilot, engineer, a USGTF Certified Instructor, a former Director of Instruction and First Tee Coach. While being all of these things Mr. Ambrose is also a Certified Vector Green Reading Instructor. In short, the founder of Lateral Line Putters (Lateral Line was founded in 2007) knows a thing or two about golf and design.

That was then… This is now.

When we look at the new EXCEL putter from Lateral Line we first need to look at the specifications. There are some notable changes when it comes to EXCEL. Among these changes is the actual weight of the putter. The EXCEL putter is 30 grams lighter than its predecessor. So instead of the head weight weighing in at a portly 620 grams, it’s now 590 grams. Although the EXCEL putter may be lighter than it’s former iteration the high MOI characteristics remains the same (MOI of 24,000). Also notable, is that the impact area is 3.75″ (the former was 3.5″) which is great from the standpoint of the putter standing up. Thus the base is more stable. The width heel to toe remains 6.25″ while the footprint of the EXCEL (front to back) is 3.75″.

(The EXCEL putter is designed as a “stand-alone” putter for aligning your putts.)

The head itself is constructed from 304 Stainless Steel and features Lateral Line Putters’ patented “Ring Design”. There is a face insert that consists of poured Surlyn (a material commonly used as the cover on golf balls).

The standard length of the EXCEL putter is 33″ which is great for allowing your arms to hang more naturally. Of course, this is dependent on the individual that plays the Excel. The Lie Angle is upright as it sits at 73* although with the XL Grip that’s employed by Lateral Line the putter feels closer to 70*. The XL grip itself is 14″ long and weighs in at 100 grams.

***Lateral Line Putters joined forces with Medicus Golf introducing the EXCEL. Lateral Line wanted to get the EXCEL putter right and they have taken their time to ensure that they have done exactly that.

I was excited to receive the opportunity to test the EXCEL putters because I had the chance to test and review the original. The original was a putter that tested really well but it also needed to have a few changes made to it. I’m always a fan of watching products evolve, however, this time it seemed maybe a little more gratifying. I think because I gave feedback the last time and that feedback was taken to heart.

Upon receiving my package from, Mr. Ambrose I was excited to see what the Excel looked like in hand. Upon opening the parcel I observed the clean black and white headcover with the “MOI MAXX Excel” branding being evident. The red “X” is a nice little accent. The finish of the shaft is a Black PVD finish and I really like how it sort of “melds” the grip, shaft, and head together.

Taking off the putter cover I was immediately impressed by the aesthetics of the head. Instead of a black or white powder-coated head, the top of the head is black with white alignment aids (railroad tracks). Although the footprint is quite large the putter in the address position looks much smaller than its physical size. I also really like the fact that this time around Lateral Line allowed for the contrasting stainless steel and black. In the case of the original, I thought that the head being entirely powder-coated “cheapened” the product. However, those minor aesthetics change really improved the overall “image” of the Excel.

I’ve already alluded to the standard length of the EXCEL putter. At a standard length of 33″ I really liked this putter. In my case, I found that that this length really allowed my arms to hang more freely. The combination of the length at 33″ paired with the weight of the head allows for a smooth stroke on the golf ball. Also, the nature of my arms hanging more freely also allowed my eyes to be aligned over the ball more consistently. Take note, this length may not work for all golfers. My set-up in this configuration was and has been more consistent. The XL Grip effectively eliminates my hands from becoming involved in the putting stroke.

Like it’s predecessor, the genius behind this putter is the fact that it will stand up by itself. This way, golfers who use the EXCEL putter can better align their putts. The “railroad tracks” employed by Lateral Line lets golfers know if their set-up is square not to mention that it will also let golfers know if their putt is aligned too high above the hole or too low. The difference between my putting using EXCEL’s “stand-alone” capabilities and not using them was astonishing. The reality is that when I used this feature as it was intended to results are significantly better. Especially on putts inside of ten feet. If my face was closed or open by a fraction the putt attempt was a guaranteed miss.

Forgiveness is not only important in metal woods and irons. Forgiveness can be just as important with putters as well. Is there a more forgiving putter in the golf industry than the EXCEL? Maybe, but if there is one I haven’t found nor tested it. Heel and/or toe strikes feel nearly identical to a strike off of the generous impact area. The stability of the head is second to none. It’s for reason that you can make the stroke without looking at the golf ball. As Mr. Ambrose explained here in a conversation with him.

“The idea of not staring at the ball during the stroke has great effects on performance. It not only improves on overall performance (either looking at the distance on the long ones, or the putter face on short putts) but places you in a present moment situation which takes those sub-conscious in stroke corrections out of the stroke.” –  John Ambrose of Lateral Line Putters

I worked on this putting methodology a couple of years back with Mr. Ambrose after the 2018 PGA Merchandise Show. It was at Orange Tree Resort where I first met Mr. Ambrose. Although the technique felt foreign and trusting it can feel awkward the method really works. In fact, it was my distance-control that really improved.

In my opinion, the EXCEL putter from Lateral Line putters is a golf product that could help golfers lower their scores. Especially, if you employ its capabilities as they were intended. The EXCEL putter is an improvement over the original MOI MAXX that was released a few years. It looks better and it feels better. Is it perfect? The answer is no but my criticisms could be viewed as being “too diva”. Honestly, if you would like to make more putts have an open mind and find an EXCEL putter to try out. If you do find one, try putting while looking at the hole.

Are there negatives to the EXCEL putter? Some may find the overall footprint a little “off-putting” and some golfers may find the features “gimmicky”. However, does it really matter what your playing partners think if you’re rolling in putts?

For more information on the EXCEL putter please click on the link here.