It’s a rainy Saturday here as I look out the window after walking my dog. It sucks, I was going to go golfing while I wait for my wife to call me after a night out at a friends house. But, that’s simply not going to happen. It’s too bad too because yesterday I finally felt some things in my swing that felt really good. Oh well, there’s always my net later on. So I figured, what a terrific time to write a blog post. On what you may ask? Well, I guess the title really says it all. 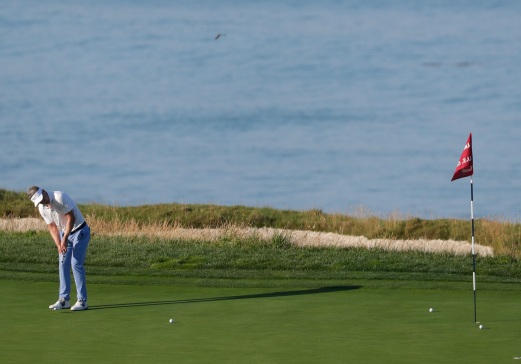 After the Open Championship the U.S. Open is my favorite golf tournament of the year (no disrespect intended to The Masters… I just simply love you). Year after year the USGA makes this tournament the ultimate golf test. Tough conditions to the point where the golf course is drained of its former self that ultimately sees the proverbial cream rise to the top. The USGA has been much-maligned in the past for this but to be honest… I love what they do when they set up the course for the Open.

2019, has been no different to an extent. The exception to this being that I’ve found the set-up this year to be pretty damn fair which is in a way a good thing. That isn’t saying that it’s quite set-up like the Pebble Beach Pro-Am but compared to Shinnecock Hills, Chambers Bay, et al it’s not quite the same. Sure the rough is grown out but the greens are certainly burned out having had the life seemingly sucked right out of them. Much in a way that’s similar to the scene in “The Prince Bride” where “Wesley” (played by Cary Elwes) is placed into “The Machine”. At any rate, “Mother Nature” is lurking in the Pacific and it’s going to be her that going to go a long way in crowning our champion. If this event turns into a “Battle of Attrition” it’ll be hard not to examine the possibility of a Koepka threepeat.

As I’ve watched the golf telecast on FOX (who ought to really stay in their own lane and stay clear of golf) I’ve found myself both bewildered and amused. Especially when it comes to the supposed controversy or drama between Jordan Spieth and his caddy Michael Greller. The fact that Spieth often talks out loud during his rounds is not a surprise. Is there a guy or girl in professional golf that talks to their golf ball more? Likely not. But when a tournament is covered by FOX that means that there is a host of cameras and of course microphones. The microphones pick up everything. Including this…

“Two perfect shots, Michael,” he said. “You got me in the water on one and over the green on the other.” – Jordan Spieth to caddy Michael Greller

Of course, everyone on social media and golf telecasts is talking about a riff or at least tension between the two usually amicable partners. Let’s have a look at some things for a second. Spieth whom in the past could do no wrong and was the second coming of Tiger has seen himself slip. His slip has been in the OWGR and in the eyes of golf fans. While he ranks 66th (at the time of writing)  in the FedEx Cup rankings it’s the slide to 28th in the OWGR that’s alarming and cause for “quasi-concern”. He hasn’t played to his level and there’s no doubt that he’s frustrated. Perhaps he has outside distractions? Getting back to the topic at hand and the issue with Greller. The first thing that I wanted to say is that I have no doubt that Greller has thick skin. He better, considering the paydays that he’s received while looping for Spieth. There is no tension in the sense that the media wants you to believe and if anything Jordan is looking to channel his frustration elsewhere. Queue Greller. As the caddy you have a few details in your job description other than the old adage “show up, shut up, and keep up”. They include but are not limited to…

Going back to Spieth’s quote. Greller selected the club and of course “the boss” has veto power. Spieth didn’t veto Greller’s selection and opinion of which club should be selected and used said club in both cases. Greller didn’t swing the club… it was Jordan and he failed to execute properly on both occasions. Jordan those two particular shots were on you. Their issues are simply non-issues and they’re fine and this is simply a case of “deflection”. Oh and one last thing. If you describe what transpired a “blasting” of Greller I suggest that you reevaluate your definition of “blasting”. Last time that I checked Jordan was a Texan and not a Canadian.

Acceleration and follow thru.Solid technique. Kids… do not try this at home. (Photo Credit: Golf.com)

Patrick Reed. As a friend of mine Mike said on Twitter Reed is a whipping boy amongst golf fans on social media.

Reed is a whipping boy for social media anyway… doesn’t surprise me!

What I’m about to say really is in my Tweet that prompted Mike to say this. Patrick Reed was frustrated and he hit a poor shot. It happens, it’s golf and it is the U.S. Open. The number of golfers around the world that would feel his frustration is in the millions. It’s just that we all have different ways of dealing with it. Parick Reed chose to snap his wedge over his thigh (while not breaking his Femur) and that was the only damage that he did. Did he have a tantrum on the golf course like Sergio Garcia or Bryson DeChambeau have in 2019? No! So lay off of him. Yes he has not endeared himself to golf fans (the top 5 in the world comment was the beginning of this judgment) but just because he snapped a club means he’s disrespectful and something else not to like about him? Like I stated above. If Tiger did this, people would be ranting about how the USGA set up an unfair golf course and would be marveling at Woods’ “super-human strength”.

If you’ve never thrown or broken a club before, have you even played golf?

Oh and one last thing. Miss. Spiranac. I’ve played a lot of golf. Recreationally, Mini-Tours and so on. I’ve worked in the industry as a Starter, Pro Shop Attendant, Assistant Manager, and as a Director of Golf Services. I’ve never “tomahawked a club” (another Tweet of hers) but I have been tempted. I’ve also never broken a club before. Why? Because we all deal with things in different ways. I simply choose to swear under my breath, scratch my chin and move on. Golf can be madly infuriating and frustrating but in life, there are more important things to get upset over. Not being able to put milk on the table and having to go to the food bank, losing your house, being mired with a myriad of health problems or not being able to pay your bills and have no heat during a Canadian winter. In my eyes, golf is not worth getting that mad over and for those of us who have to work for everything that we have… we have more important things to spend our money on than buy a new shaft and grip and then install it or have it installed.