Allow me to get straight to the point. Without women, none of us would be here in any way shape or form.

March 8th is International Women’s Day and to coincide with this day, a date for Women’s Golf Day has been announced. I’ve said it before and I’ll say it again. More attention needs to be brought to women and getting them involved in golf. The route through growing the game has to come directly through women as they are a demographic that truly haven’t been immersed into the game enough.

Women’s Golf Day was the vision of its founder Elisa Gaudet. will take place on June June14th, 2019. This year marks the fourth year that the initiative has taken place which started out as a “labour of love”. Billed as a 4-hour event for women and girls (junior golfers need to be exposed to the game more as well). Women’s Golf Day is all about women and girl’s learning golf skills and taking up a game that they can play for the rest of their lives. Since it’s inception Women’s Golf Day has taken place “at over 900 venues in 52 countries and have delivered a golf experience to over 50,000 women and girls”.

In conjunction with Women’s Golf Day it has been announced that Women’s Golf Day has partnered with the ANNIKA Foundation. World Golf Hall of Fame Member Annika Sorenstam’s foundation is an organization that’s focused on providing “opportunities in women’s golf at the junior, collegiate and professional levels while teaching young people the importance of living a healthy, active lifestyle through fitness and nutrition”.

For more details on Women’s Golf Day and the ANNIKA Foundation please see the press release as shared by David Wheatley from marketing firm Medi8 Limited. I know what I’m doing this coming June 4th.

Women’s Golf Day will return for its fourth year on June 4th 2019 in what promises to be the largest single day celebration of Women’s golf that the world has ever seen. And having entered into a brand new partnership with the ANNIKA Foundation, the charitable foundation of women’s golf legend Annika Sorenstam, WGD will reach further than ever before in helping to support young women around the world with the power of golf, for years to come.

Women’s Golf Day is a one-day four-hour global experience for women and girls. It is a celebration of women and girls learning golf skills that last a lifetime and being part of a larger global community. Over the past three years WGD events have been held at over 900 venues in 52 countries and have delivered a golf experience to over 50,000 women and girls. Plans for WGD 2019 are well under way and the initial response from both host venues and potential participants has been unprecedented.

From what started out as a labor of love for WGD founder Elisa Gaudet in 2016, the numbers of women that have been reached WGD is remarkable in itself, but with new partnerships and the potential for continued impact on women and girls all over the world, WGD 2019 is ready to raise the bar even further, as Elisa comments, “Annika continues to be a global icon and a champion for women around the world to get into to golf and succeed. She has been a great supporter of WGD since we started out on our mission to engage, empower and support women through golf in 2016. We are thrilled to be to be able to support Annika in her goals for the ANNIKA Foundation and encourage our locations to around the globe to support women achieving and advancing through golf.”

Annika echoed the words of Elisa as she offered her support for the 2019 WGD events worldwide, “After I stepped away from competitive golf, I knew I wanted to share my passion for the game. Working with initiatives like Women’s Golf Day, which share many of the same goals I have for my ANNIKA Foundation, is inspiring. While there’s still much work to be done, we’re making great strides toward bringing our great game to even more women around the globe.” 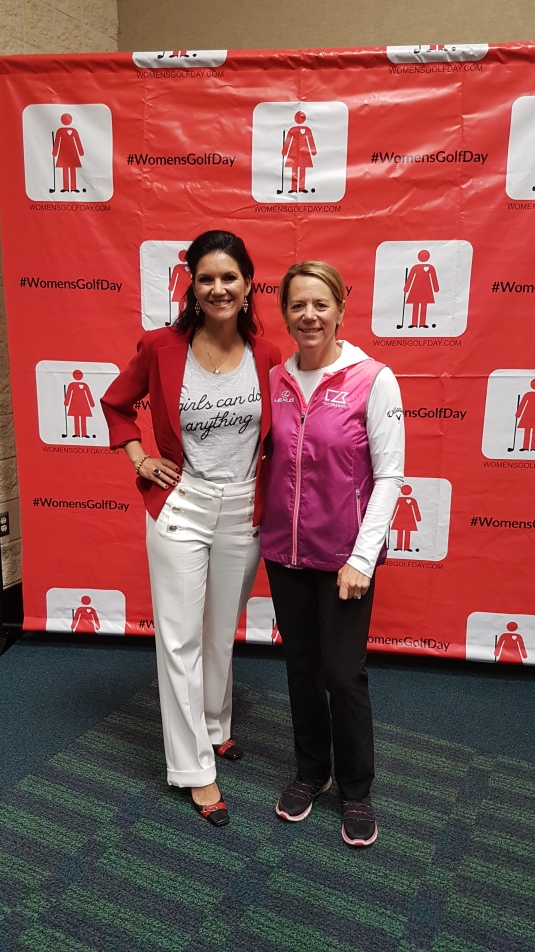 Any venue wishing to register to host an event for Women’s Golf Day 2019 should visit www.womensgolfday.com and go to “Register a Location” And you don’t need to be a golf course to take part. Past venues include Golf clubs, PGA Superstore, Topgolf, Retail stores, Driving ranges – essentially  anywhere you can swing a club!

For anyone interested in talking part at a WGD event, keep an eye on the WGD social media at @womensgolfday and #WomensGolfDay and check into www.womensgolfday.com for news of new venues signing up around the world every day.

Women’s Golf Day (WGD) is a global golf initiative launched in 2016 to introduce women of all ages to the game and encourage existing female golfers to “tee it up” in a fun and highly inclusive environment. The one day, four-hour event, has now taken place in 900 locations in 52 countries since its inception, and has introduced thousands of new golfers to the sport while transcending language, culture, religion, and race to celebrate golf, women, and community. WGD created an incredible global community in three years and has the support of almost every major golfing governing body and organization. WGD’s primary hashtag #WomensGolfDay received more than 15 million global impressions to nearly 10 million users across Twitter and Instagram.

About the ANNIKA Foundation

Annika created the ANNIKA Foundation to provide opportunities in women’s golf at the junior, collegiate and professional levels while teaching young people the importance of living a healthy, active lifestyle through fitness and nutrition. The Foundation has partnered with key organizations to promote healthy, active lifestyles for children, including SPARK, Florida Hospital for Children in support of its Healthy 100 Kids initiative and The First Tee in development of the Nine Healthy Habits curriculum for children.