Metal woods can be a funny golf club for many golfers. While they can help lower scores by getting you on a Par 5 green in two there are many golfers who can’t use them. They totally struggle. My advice for you if you fall into this category is to check your ball position. It’s likely too far forward (down-range side of center). However, many golfers at times will use a fairway metal as a substitute on the tee. The shorter the golf club, the more control that you gain. Essential on holes where you need to be precise.

When Callaway Golf followed up 2018’s effort with the Epic Flash range I was pretty excited. Admittedly, I’m not a Callaway Golf guy (nor am I “any guy” for that matter) However, what I heard about the Rogue metal woods (hybrids too) was that they were fantastic and amongst the longer clubs of their genre.

When the embargo (a period of time that manufacturers have when pictures or information cannot be leaked) ended I was liking the information that I was reading and gathering. Callaway Golf is pretty good at two things in particular.

Their marketing efforts had this writer interested in what they were saying. My curiosity piqued. Below, Dave Neville Sr. Director, Brand & Product Management for Callaway Golf explains to us the Epic Flash fairway metal (sorry about the wind).

When it comes to the 2019 Epic Flash metal wood product range from Callaway Golf you will see one or two operative terms or buzzwords. What you’ll be most likely to hear is one of “Artificial Intelligence” and/or”Flash Face Technology”. Callaway Golf metal woods R&D designed and created a club face with one goal in mind. To give golfer’s speed like they’ve never seen before. More speed equates to more distance.

The face of the Epic Flash metal woods is manufactured from 455 Carpenter Steel which is known for its ability to provide higher MOI and trampoline effect across the entire face of the golf club. This is whether the strike is “on the screws” or if the strike is off-center. Basically meaning, your mishits will not be greatly penalized.

“Jailbreak Technology” first became to golfers when Callaway Golf launched the Great Big Bertha Epic driver. As the product has evolved we saw Jailbreak Technology used in last year’s Rogue fairway wood. 2019 is no different as the Epic Flash fairway metal incorporates the proven technology as well. The bars located behind the face is also instrumental in providing golfers more speed. Note the recurring theme? Golfers are distance obsessed.

The Epic Flash fairway metal is a very adjustable golf club. Employing Callaway Golf’s “OptiFit” hosel golfers (with or without the help of a fitter) can optimize their launch and ball flight. Because the updated Optifit hosel is more streamlined (lighter) Callaway Golf R&D was able to use the weight elsewhere and reposition the CG (Center of Gravity) enabling golfers to be able to launch the golf ball easier and for long distance.

Callaway Golf offers quality premium Tour-proven shafts as stock offerings. Shafts offered to include the Project X Even Flow (45, 55 and 65-gram versions) and the Project X HZRDUS Smoke in both 70 and 80-gram options. Your only connection to the golf club is the grip and the Golf Pride New Decade Align is the stock grip. The grip is a great choice and is smartly coordinated with the color story of Epic Flash.

When it comes to loft options there are plenty to choose from. Starting with a Stong 3 Wood the options include heads that work their way down to an 11 Wood. But also includes Callaway Golf’s trademark Heavenwood as well.

One of the products that I was really excited to swing at the 2019 PGA Merchandise Show Demo Day was, in fact, the Epic Flash. While I was mostly homed in on the driver and Apex irons the fairway metal was a definite “product of interest”. Not only did I have requests from readers but I also had to see for myself if the epic Flash fairway metal could impress me.

Demo Day Conditions: During my time at the Callaway Golf booth at Demo the skies were clear and the temperature hovered around 72*F/22*C. It was dry and windy with the winds coming from right to left over my right shoulder. A carry wind.

Aesthetics: When it comes to the aesthetics of the Callaway Golf Epic Flash I would describe it as sporty with a side of… “flash”. The golf ball sets up beautifully behind the black face and the carbon composite crown is front and center. While I’m not crazy about the white line that sits just behind the “Chevron” alignment aid I did like the accenting towards the trailing edge.

Flipping the club over, you know what golf club it would be if you stumbled upon one in the rack at your favorite golf shop. If the model name on the sole doesn’t catch your eyes then the yellow and green paint scheme will. Everything is coordinated as the grip seamlessly blends into the color scheme of the shaft and ultimately ending at the head. It almost feels like an Epic Flash player should with The Masters.

Sound/Feel: I haven’t said this too often and I definitely didn’t say it about last year’s Rogue but… the sound and feel are exactly what it looked like it should be. Perhaps it’s literally the pitch of the 455 Carpenter Steel face but I would suggest that the sound is crisp yet muted. Pure I guess could be the adjective.

The golf ball feels lively off of the face and again this could be in part to the 455 Carpenter Steel face. However, I think I would be foolhardy if I didn’t suggest for a second that the “Jailbreak Technology” played a significant role. Just so solid!!

Performance/Distance: Alright, what I can’t give you are precise, concrete launch monitors. What I can report however is what my eyes saw.

As mentioned, the golf ball jumps off of the face of the Epic Flash fairway metal. In much the same way that a missile rockets off of the missile rail of an F-22 Raptor. It doesn’t take long for the golf ball to hurtle down the fairway. The trajectory in the setting that I used (15*/Neutral) was optimum for my game. The ball flight was aggressive and penetrating.

The golf ball just sort of “floated” as it carried down range. The wind over the right shoulder for a right-handed golfer is more of a carry wind so I did take that account when thinking about the length. The Epic Flash fairway metal is long and as I reported to my coach it IS the longest that I’ve ever hit. I would be aggressively pursuing Par 5 greens in two with an Epic Flash in my bag.

Shaping the ball is a breeze with Epic Flash. Right to left and left to right wasn’t an issue. Nor was flighting the golf ball. But for the most part, my stock shot is straight and with the Epic Flash, this remained the case. The 70 gram Project X HZRDUS Smoke Black 70 and I got along extremely well. I was beyond impressed.

***All swings were off of the deck. Not once was a golf ball teed up. 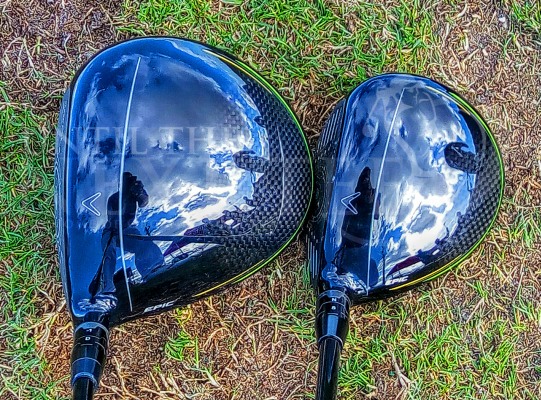 Leading up to this week’s PGA TOUR stop (Arnold Palmer Invitational) at Bay Hill Callaway Golf announced that they had signed Major Champion and Ryder Cup hero (Europe) Francesco Molinari. Just based on these fairway metals (Spoiler Alert: The driver is amazing!!) I would have signed with Callaway Golf as well. The Epic Flash fairway wood is the longest fairway metal that I’ve ever had the pleasure of swinging. It’s a golf club that’s extremely easy to launch off the deck. Forgiveness and control without sacrificing distance… Or vice versa. A confidence builder and Eagle set-up machine on Par 5’s. With the Epic Flash fairway metal, I don’t even know if I’d have a driver in the bag. Yes… it was that solid of a “First Impression” and I wouldn’t hesitate to put it into play… Yesterday!! There’s a big reason why the Epic Flash WON the Teezy Award for the “Top Fairway Metal” at the 2019 PGA Show.