This week’s PGA Tour stop was the Waste Management Phoenix Open. The hole of “The People’s Tournament” where the rowdiest, rocking, raucous fans gather around the 16th Hole. It’s a stadium atmosphere that by no accident happens to be on the same weekend as the Super Bowl. Honestly, I wish golf had more of this but this is what makes this tournament so special. It’s their baby… it’s the very entity of this event. What often is forgotten about the WM Phoenix Open is the fact that this tournament has raised $122 M USD for Arizona Charities. 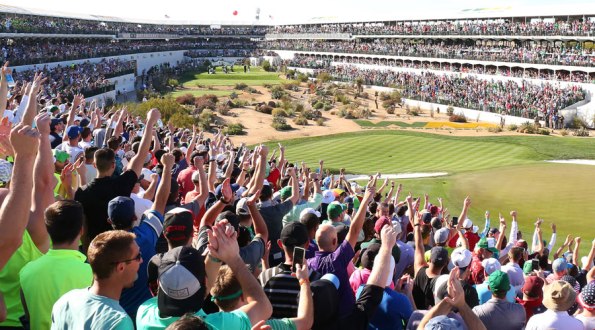 The Thunderbirds do their thing… one day I will be there too. (Photo Credit: WM Phoenix Open)

This week was different as well because we saw the PGA TOUR debut of Matthew Wolff. Wolff, is a 19 year old amateur who plays collegiate golf at Oklahoma State University (yes… the same OSU as alum Rickie Fowler). He was a First Team All-American as a freshman and won his final three events last fall. A swing that can win quite obviously… right?!

According to the “Golf Twitterverse” Wolff’s swing as unorthodox as it “seems” drew the ire of the “keyboard warriors” that are all “PGA Professionals” amongst us. Some of the comments that I read were things like

Basically, there were plenty of people insinuating that his swing was trash. A total “Dumpster Fire”. Basically, if you think that this swing is trash you must also think that Jim Furyk and Ryan Moore are also trash and have no idea of the golf swing in general.The first thing that you need to consider is this. It doesn’t matter how you get to the top… it’s how you get to the bottom. The swing is the most important in the approximately 24″ before and post impact. When I work with students I ask a couple of questions the first time that I work with someone. The first is “Do you have any health impediments?”. The second question is this.

“What do these swings have in common with each other. Annika Sorenstam, 2000 Tiger Woods, Jim Furyk, Bobby Jones, Jack Nicklaus, Phil Mickelson, Adam Scott and Ryan Moore have in common?”

The answer is almost always “No idea”. So I enlighten them with the easy answer. It’s where they’re at pre-impact, impact and post-impact”. There is NO ONE correct way to swing a golf club. All of those swings proves the point.

Matthew Wolff is -3 thru 14 in his PGA TOUR debut.

And a swing you have never seen before. 😯 pic.twitter.com/rdoMo4NwS7

Here’s my take on his swing.

Essentially, there’s a ton of good going on in his swing… and it clearly displays the power and why he’s won.

The long and short of this is to simply… “Swing your swing”. Oh… he also made the cut too!

***I will elaborate on Ho Sung Choi in the near future