This is my first time to the PGA Show and I’m nervous yet also excited about it. It was a rough start but I am hoping it goes smooth. I was excited to go but then our flight was cancelled. We had to call our airline (Frontier) and they were nice enough to get us on a later flight and did not charge us anything extra. That helped ease the stress a little bit and then Monday happened.

First of all let me say, I am not an early bird and I prefer to sleep in. Today that didn’t happen. Due to our lack of a vehicle currently it was a nice early day to hop on our bevy of buses. The first bus was at 7 a.m. and then the next bus was at 8:15 a.m. after waiting in the bus terminal.

We got to the airport in a reasonable amount of time and yet we still had another 3-4 hours wait for our flight. The clearance through customs was quick which was shocking considering the US Government is on a shutdown. We were expecting a long wait to get through TSA but we were through within about 15 minutes. We made our way to the gate and decided we would just plant our behinds there. We were able to get a nice Wi-Fi connection and just watch the commotion outside.

Considering we were hit by Winter Storm Harper a couple of days earlier you wouldn’t know it by looking outside. There was a lot of snow on the tarmac but there were plows going over it constantly. The sky was blue and hardly any clouds. You know? The nice fluffy white ones, no gray and no dim. This was starting out as a beautiful day. Now to see what the rest of the week will bring. 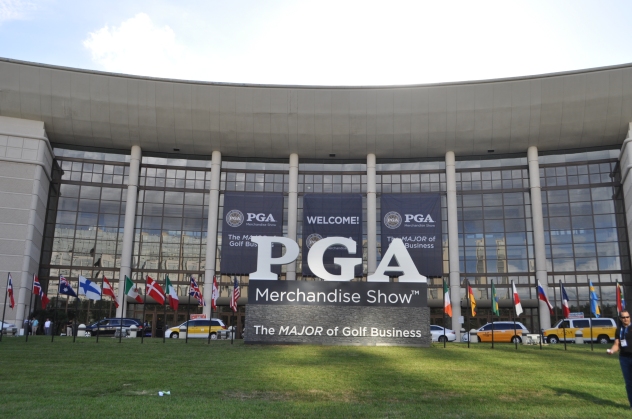 I have plenty of meetings coming up with women’s apparel companies and I look forward to seeing what’s out there for us women. I wonder what the women will want to know about and how I’m going to get it for them. There are a couple of events geared specifically towards women and I hope to cover them and bring some input from the women of the golf industry.