What kind of golf writer would I be if I didn’t write a piece on the modernized rules of golf? Or at least the changes to the rules as prescribed by the governing bodies (R&A and USGA) for 2019. While this piece won’t be about all of the changes about to take effect as the calendar changes to January 2019 it will be about certain ones and my take on them. Now does this mean that I won’t have a summary of at least some of them? Of course not… see below.

Dropping procedure: When taking relief (from an abnormal course condition or penalty area, for example), golfers will now drop from knee height. This will ensure consistency and simplicity in the dropping process while also preserving the randomness of the drop. (Key change: the proposed Rules released in 2017 suggested dropping from any height).

Measuring in taking relief: The golfer’s relief area will be measured by using the longest club in their bag (other than a putter) to measure one club-length or two club-lengths, depending on the situation, making for a consistent process for golfers to establish their relief area. (Key change: the proposed Rules released in 2017 suggested a 20-inch or 80-inch standard measurement).

Removing the penalty for a double hit: The penalty stroke for accidentally striking the ball more than once in the course of a stroke has been removed. Golfers will simply count the one stroke they made to strike the ball.  (Key change: the proposed Rules released in 2017 included the existing one-stroke penalty).

Balls Lost or Out of Bounds: Alternative to Stroke and Distance: A new Local Rule will now be available in January 2019, permitting committees to allow golfers the option to drop the ball in the vicinity of where the ball is lost or out of bounds (including the nearest fairway area), under a two-stroke penalty. This Local Rule addresses the concerns raised at the club level about the negative impact on pace of play when a player is required to go back under stroke and distance. The Local Rule is not intended for higher levels of play, such as professional or elite level competitions. (Key change:  this is a new addition to support pace of play)

Major proposals introduced in 2017 that have been incorporated into the modernised Rules include:

Elimination or reduction of “ball moved” penalties: There will be no penalty for accidentally moving a ball on the putting green or in searching for a ball; and a player is not responsible for causing a ball to move unless it is “virtually certain” that he or she did so.

Relaxed rules for “penalty areas” (currently called “water hazards”): Red and yellow-marked penalty areas may cover areas of desert, jungle, lava rock, etc., in addition to areas of water; expanded use of red penalty areas where lateral relief is allowed; and there will be no penalty for moving loose impediments or touching the ground or water in a penalty area.

Relaxed bunker rules: There will be no penalty for moving loose impediments in a bunker or for generally touching the sand with a hand or club. A limited set of restrictions (such as not grounding the club right next to the ball) is kept to preserve the challenge of playing from the sand; however, an extra relief option is added for an unplayable ball in a bunker, allowing the ball to be played from outside the bunker with a two-stroke penalty.

Relying on player integrity: A player’s “reasonable judgment” when estimating or measuring a spot, point, line, area or distance will be upheld, even if video evidence later shows it to be wrong; and elimination of announcement procedures when lifting a ball to identify it or to see if it is damaged.

Pace-of-play support: Reduced time for searching for a lost ball (from five minutes to three); affirmative encouragement of “ready golf” in stroke play; recommending that players take no more than 40 seconds to play a stroke and other changes intended to help with pace of play.

It wasn’t that long ago when Canadian PGA Tour professional Mackenzie Hughes took to Twitter about them. Asking the golfing Twitterverse what we thought. Mackenzie… here’s what I think about some of them.

Mackenzie Hughes‏Verified account @MacHughesGolf Dec 19
I just went through the new rules of golf for 2019 again. I feel like a few of the changes are good (ex. caddie alignment, loose impediments in bunkers), but I feel like most of them missed the mark (ex. ball drop from knee height, damaged club, and more). Thoughts?

Dropping Procedure: I think this rule change is pointless. Dropping from the knees? What was so difficult about holding the arm up at shoulder height and letting go of the ball? I’ll be sure to work on my technique.

Measuring in Taking Relief: Well this one has zero effect on me. For one who really is taking advantage of using the Bernhard Langer ski pole putter any more? Not I. I’ve always used my driver.

Removing the Penalty For Double Hit: have you “T.C. Chenned” a shot? If you aren’t familiar with the term Google T.C. Chen. I can’t remember if I’ve double hit a shot. However, if you have this issue… make sure that you accelerate through your chip or pitch.

Balls Lost or Out of Bounds: Alternative to Stroke and Distance: Alright, this one I like. How many out there have legit handicaps where they’ve gone back to the tee to hit 3 from the tee in a casual round of golf on a backed-up golf course? Be honest! This one makes sense and could help the pace of play issue. Bear in mind that it’s technically a Local Rule. Golf courses… start printing new scorecards.

Elimination or reduction of “ball moved” penalties: No penalty for accidentally moving a ball during a search. Another one that I like. Just remember that fluffing a lie or using your “foot wedge” is not an accident. No honor among thieves.

Relaxed putting green rules: I really like this one too. The fact that it was a penalty for repairing a spike mark etc in the first place was silly. As far as leaving the pin in. It’s something that I already did ONLY when I played by myself. Keeping the pin in only keeps the ball out. Then again with my putting it’s really not a concern.

Relaxed rules for “penalty areas” (currently called “water hazards”): Honestly, this one makes sense. Say I have a massive piece of lava rock bugging me and my shot. Why not move it in hazard? It makes sense to me. that said, don’t have a crew of people on the ready to move massive boulders (Tiger… you know what I’m talking about).

Relying on player integrity: Golf is supposed to be a game of honor. It really is. The fact that this needs to actually be outlined is ridiculous. We both know your ball travelled OB with 230 yards remaining to the green. So why are you dropping it at the 150 yard marker? The fact that fans watching at home can’t call in breaches is great too. I always wondered… where did they find the telephone numbers? Was it the Bad News Bear Go To Houston? “Let them play… let them play!”

Search For Lost Ball: Love this one! Love it a lot! Searches dropping from 5 minutes to 3 minutes is great. I know there are a lot of you out there taking “5 minutes” to search for that Pro V1 you hit OB. Yeah I know it’s a $5 ball… but you found it the last time you hit one OB so it cost you nothing. Can’t find it? Take advantage of the new rule (Stroke and Distance) and play on. Keep people employed in the golf ball industry. Oh and for the love of God and all things right in the world leave your ball rake (retriever) home. If I could I would ban them altogether. Nothing clogs a course more than those guys and gals spending 10 minutes or more around a water hazard ball hawking. Marshall’s/Rangers this goes double for you!! You guys already have garbage cans full of balls at home. 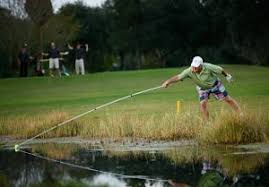 Folks, if you’re playing a round of golf that is strictly recreational play “Ready Golf’. After all even though it’s late Sunday you aren’t playing for the Green Jacket. Also, for the same reasons if you hit the ball only 200 yards with a helping wind and/or are a 25 handicap please don’t even look at “the tips”. Play within your skill level and comfortable yardage. Maybe it’s the forward tees (not ladies tees.. don’t need that stigma) who cares? Not only will your round be quicker and not only will you maybe enjoy the game more but your handicap may drop as well too! It’s a win-win.