Special Thanks go to Vice President of Marketing Jon Claffey. Without Mr. Claffey this testing and review opportunity would never have afforded itself. Thank-you!!

Tour Edge Golf. Based in Batavia, Illinois has been long known for developing high quality, game-improving equipment. As a matter of fact, it’s founder (David Glod) founded the company in 1986. His mission then was to provide golfers “high quality and technologically advanced golf products that were as cutting edge as they were affordable”. I’ll always remember that one of the first ironwoods/hybrids that I remember seeing was their original Bazooka Ironwood (which dates back to 2006). Easy to launch, forgiving but it wasn’t quite my “cup of tea”.

In 2005, Tour Edge entered into a new adventure. Their Exotics line was launched. The new line offered equipment that featured high-end materials (premium shafts) and ultimately a higher-price tag than their Bazooka line. Their original Tour Edge Exotics fairway metal had a serious cult following. I remember being part of golf forums back in the day and I distinctly recollect everyone saying how long they were. Tour Edge Exotics introduced the golf world to “combo brazing” which meant there were no welds, saving weight and adding more “trampoline effect” to the clubface.

As we fast-forward the clock to the present (December 2018) a lot has changed with the Exotics product range. 2018 was a banner year for Tour Edge. The brand created by Mr. Glod (in his father’s garage) saw its golf clubs earn five victories, eight runner-up finishes, 24 Top-5 finishes and over 40 Top-10 finishes on the three PGA Tours.

Further building on that momentum was the introduction of a new product range of equipment for the 2019 calendar year. Introducing… the Exotics EXS range. When we talk about this new range which features  a driver, fairway metals, hybrids and an iron set we have to look at the tagline that Tour Edge has attached to it.

“Pound For Pound, Nothing Else Comes Close”

Pretty strong claims and great for marketing purposes… but what does it mean? Basically, you’re getting a ton of technology, premium materials, and a premium shaft packed into a golf club at a very fair and reasonable price point. What’s so great about their claims is that quite simply… it’s true. Just for comparison sake, their new EXS driver has a MSRP of $299.99 USD where their competitors come in at approximately $200 USD more.

Having dispensed with the basic background information it’s time to get talking about the club that I received for testing and review. Through discussions over social media and an e-mail exchange or two with Tour Edge Vice President of Marketing Jon Claffey I would receive one of the EXS Hybrids for review. There are key points and technologies when talking about and looking at the EXS Hybrid. 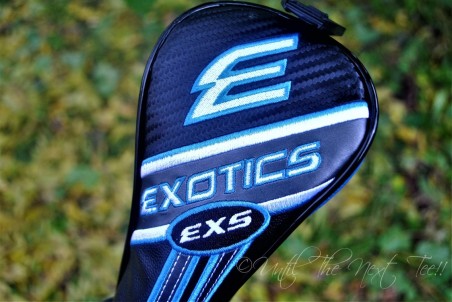 The loft that I selected for the testing was the 22* (4H) which was shafted with a Stiff flex 80-gram shaft. When the box arrived there was an air of excitement. Truthfully, I’ve been wanting to “break in” and do a long-term review of Tour Edge for a very long time and this was the opportunity. When I opened the box the first thing that I really noticed was its headcover. It’s blue (somewhere between Electric and Cobalt Blue) and it’s a stark contrast from the black and silver also seen on the cover. Also of interest about the headcover is the branding “E” for Exotics on the “Carbon Fiber” weave towards the top of the cover. As I pulled the EXS Hybrid out from it’s plastic wrap sheath I couldn’t help but notice the aesthetics. First of all, the MCA Tensei CK Blue 2G shaft pairs perfectly with the head and yes… the paint scheme. The grip is the familiar Lamkin UTx with a blue end cap and looking down the shaft towards the head is a sticker that boldly states “100% Assembled in The USA”. Flipping the club over you notice the SlipStream speed channels and it looks “smart”. As I ran my fingertip over them what I found myself curious about was the wave-like contouring of them. The removable weight (additional weight-kit can be purchased) sits near the trailing edge. Looking at it you know it’s going to get the ball into the air quickly. All in all… the unboxing left me with a very positive first impression. 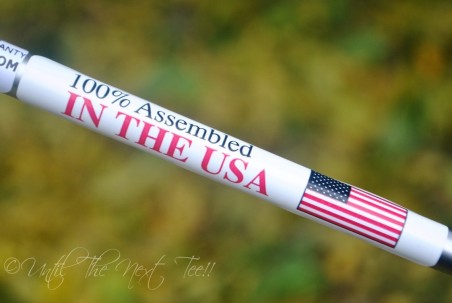 Initially, I wasn’t too sure when I would get to test this club to see what it was capable of. I’ve been recovering from my Stroke in September. But I noticed that I was improving and then my Physiotherapist said that I was cleared to resume some golf activity. What started out as solely chipping and pitching with a wedge led to me picking up the EXS Hybrid for the first time. When the head sat behind the ball for the first time I had two initial thoughts.

Looking down at address, not only couldn’t I wait to put a swing on with it but I HAD to make a swing. So I did… first quarter swings and then eventually 50%. My observations at this point were that the ball was “jumpy”. Which is to say the clubface feels responsive. Secondly, there was the feel and acoustics. The face felt “light” and the sound was “sharp” at impact. “The hyper-strength strength steel is quench-hardened, a special heating technique that takes 750 degrees to provide an extreme amount of strength while allowing for a thinner face. This cup face design allowed for Tour Edge to make the face thinner than in any previous model for a greater energy transfer”. In the midst of making these swings my Smash Factor was a pretty efficient 1.45 (FlightScope mevo) which wasn’t bad considering my lengthy layoff. My distance was anywhere from 170 to 178 with these 50% swings. Again, I was left impressed.

I continuously ramped up my swings going to 75% while in the backyard. Even though I was only hitting into a net I couldn’t believe how hot the face of the EXS felt. During this time I used a combination of golf balls ranging from Titleist Pro V1, Srixon Golf Z Star/Q Star Tour and Forte Golf Apex 6 golf balls. But as terrific as the feel was of the ball coming off of the face it was the acoustics that caught my attention. I’ll maintain the use of the adjective “sharp” and “piercing”. The yardages that I was beginning to see with the launch monitor(s) were numbers like what you’ll see below.

While the numbers look good hitting into a net 10 feet away life is very different than in the real world. Or is it? As I worked my way towards full swings I had fully intended on going to at least the range to see this club in action. That was until I decided to visit a nearby golf course to make a few swings yesterday (December 16th). The conditions were extremely soft and it was a overcast, balmy 40*F (+4*C) when I teed up my first shot and it was 34*F (+1) when I walked off the course. I ended up playing 11 holes with only the EXS hybrid and a PW. The numbers above ended up being pretty representative of what I saw yesterday. This club is everything that I thought that it would be… while hitting shots into the net. Considering I hadn’t stepped foot on a golf course since late-August or early-September I had no idea what to expect. I can tell you that what followed was not expected. 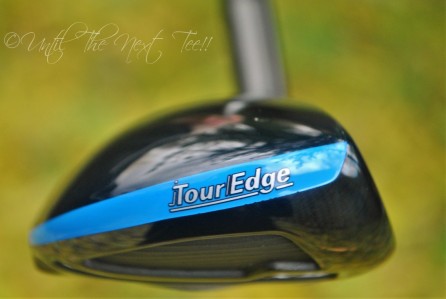 The EXS Hybrid was better than I expected out of the gate. Launching the ball was a breeze. Quick to get airborne the ball did not balloon. The MCA Tensei CH Blue 2G shaft deserves some of the credit here. The shaft is smooth and “kicks”. More to the point however, was the penetrating ball flight that the EXS hybrid exhibited time and time again. I used the EXS hybrid off of the tee and all it did was deliver straight, authoritative shots down the middle of the fairway. From the fairway, it was more of the same and going 4H, 4H, and PW set me up great on the Par 5’s. If I had the choice between any 17* fairway wood or the 17* EXS hybrid I would choose the EXS hybrid. If the 22* did this in “carry only conditions” what could a 17* lofted EXS hybrid do? Even the 22* loft in dry conditions would be an absolute thing of beauty. These hybrids could make Par 5’s quiver in their boots. 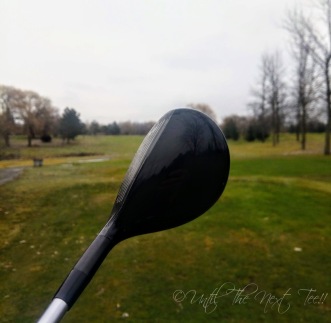 I think much of it has to do with the “SlipStream Sole” and how it interacts with the turf. While the sole just slid through the soft fairway conditions I would also drop balls in the rough to see how the EXS hybrid handles the rough. The results were the same. Great face on ball contact, ease of launch and a penetrating ball flight with a tight baby draw. One such shot from the rough was on a Par 5 with 196 yards to cover the water guarding the entire front of the green. Into the wind, my shot landed right in front of the green on the fringe. This was actually the first hole that I played and gaining confidence with this club happened very quickly. My confidence would only continue to grow as “the round” continued.

The Exotics EXS hybrid from Tour Edge Golf is a clear cut winner. Pound for pound they might very well be the best hybrid for 2018-19. In fact, out of all of the hybrids that I’ve used, experimented or tested thus far between playing and doing golf equipment reviews I’ll say this. The Exotics EXS is the best of the bunch in my opinion. From the black PVD finish of the face to its eye-pleasing footprint you just know that you have a high-performance birdie-slaying, Par 5 killing weapon in your hands. The fact that the Tour-proven MCA Tensei CK Blue 2G comes stock as the shaft is a massive bonus. There’s a ton of technology packed into this golf club and it has a very attractive price point attached. The Exotics EXS from Tour Edge can be purchased for $199.99. For more information please visit Tour Edge. “Golf’s Most Solid Investment”.