Wilson Golf. The golf brand that has won 61 Major Championships (and counting) continues to make major gains in the golf industry.

Over the last several years at the annual PGA Merchandise Show I’ve noticed a trend from the Chicago ,Illinois based company. Their iron sets have improved and impressed year in and year out. Often making me wonder why they get for the lack of a better term “over-looked” by the average golf consumer. Whether it was the stunning FG Tour 100 blade irons from 2014 or the uber-impressive FG Tour V6 irons (which I thought were the best overall iron set in 2017). Wilson Golf continues to bring golfers iron sets packed with innovation (FLX Face Technology and Power Hole Technology), iron sets at a fair price point and irons for specific types of players. Whether you’re a “Feel”, “Crossover” or “Distance” type of player Wilson Golf has an iron set specifically for you.

New for Wilson Golf in 2019 is the latest in their “Distance” iron category. Introducing the all-new Wilson Golf D7 iron set. The aesthetics of the D7 irons are a combination of the C300 and the aforementioned FG Tour V6 irons. While looking through the various pictures in the media kit you can definitely see the influence of both iron sets in the genetic make-up of the D7. The key technology in the D7 irons is what Wilson Golf calls “RE-AKT Technology”. The D7 irons feature three rows of “Power Holes” which enables golfers to have more ballspeed off of what is said to be a very responsive clubface (Wilson Golf’s thinnest ever).  The longer irons (4-7) boast more “Power Holes” than the short irons and this is for a function. Less “Power Holes” in the short irons allows for more “precise distance control” and “maximum feel” when hitting approach shots into the green. 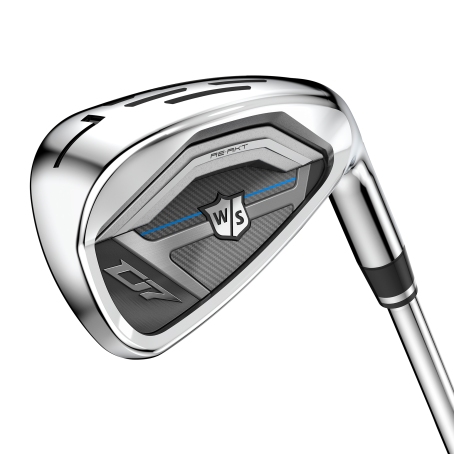 Look close enough and you can see the influence of the FG Tour V6 and the C300. (Photo Credit: Wilson Golf)

The Wilson Golf D7 irons come with either UST Mamiya Recoil Series 65 gram shafts (graphite) or KBS Tour 80 (steel) as their stock shaft offerings. These irons are going to be launched globally just prior to the 2019 PGA Merchandise Show (January 17th, 2019) with limited quantities being available beforehand.

For more details, please see the press release shared below by Lindsay Lasater from Wilson Golf and Zac Herndon of The Brand AMP. 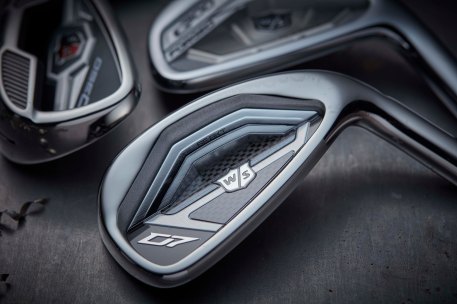 With the “D” in D7 standing for distance, the new line of irons integrates Wilson’s RE-AKT technology to provide golfers power where it is needed most. Featuring three rows of Power Holes in the long irons (4-7) and Wilson’s thinnest club face ever, the D7 irons ensure golfers get maximum distance due to the greater responsiveness off the club face.

“The D7 line is our latest installment of game improvement irons that will give golfers increased distances on the longer irons and precision with the shorter clubs,” said Jon Pergande, Manager, of Wilson Golf Club Innovation. “Our RE-AKT technology and ultra-thin, responsive club face increases ball speeds to help produce maximum distances, while the shorter clubs give golfers a greater feel and more distance control.”

With fewer Power Holes than the longer irons and optimized weighting, the shorter D7 irons are ideal for golfers seeking maximum feel and precise distance control when approaching the green. 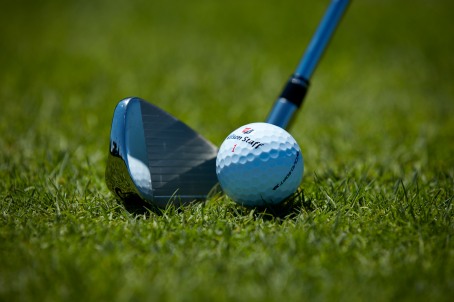 The new design aesthetics of the club face include straighter lines, a cleaner topline and improved weighting. The irons are outfitted with Recoil Series Graphite shafts, available in A, R and S flexes at 65 grams. KBS Tour 80 Steel shafts are also available in R and S flexes.

The D7 irons will be available for pre-sale on Wilson.com and retailers starting Thursday, Jan. 10 and launched globally on Thursday, January 17th. Retail price for the D7 irons is $599.99 for Steel and $699.99 for Graphite.

A limited-run of D7 irons will be available in select southern retail locations leading up to the Jan. 17 launch. 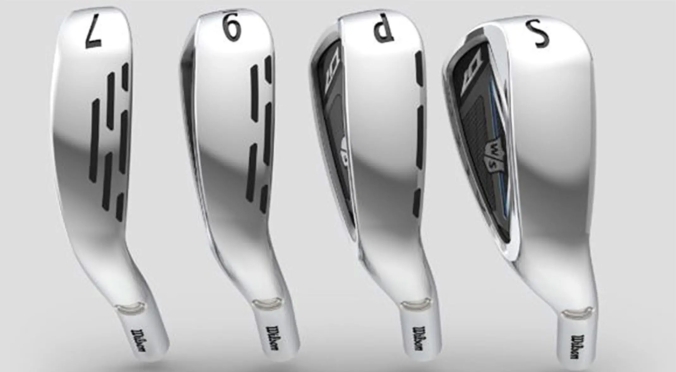 For 100 years, Wilson Golf has designed, manufactured and distributed premium and recreational golf equipment throughout the world.  Since 1914, Wilson Staff irons have won 61 major championships, more than any other iron manufacturer in history.  The winning tradition continues today by delivering the highest quality equipment to all golfers to enhance performance on the course and overall enjoyment of the game.

Chicago-based Wilson Sporting Goods Co., a division of Amer Sports, is the world’s leading manufacturer of sports equipment, apparel and accessories.  Through its dedication to creating products that enable athletes at every level to perform at their best, Wilson has earned its place as a leader in sporting goods for over a century.

One thought on “WILSON UNVEILS D7 IRONS WITH RE-AKT TECHNOLOGY”