It isn’t often that I use the pages of my website to vent or complain. But in this situation I’m going to do just that.

The RBC Canadian Open… My nation’s National Open is a few weeks away from happening. Recently, it was announced that our national championship was going to see it’s “field purgatory” (currently follows The Open Championship directly afterwards) changed to be a week before the U.S. Open. A very welcome change. While they’ve managed to attract some big names to the field (Dustin Johnson, Bubba Watson and Brandt Snedeker to name a few) you’d never see a guy like Justin Thomas, Rickie Fowler, Justin Rose or Jordan Spieth in the field no matter how many RBC (Royal Bank of Canada) dollars they’re offered. So maybe, there’s a slight chance that the date change helps. Who really knows? 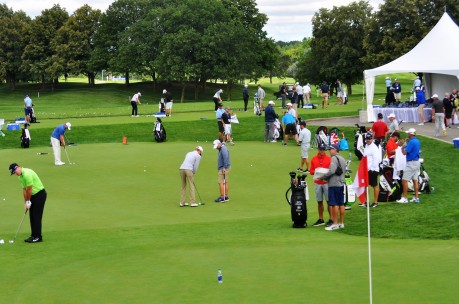 The best that I can do from outside the ropes.

This year,  I find myself very disappointed with the RBC Canadian Open and their governing Golf Canada. The tournament has been held within 55 minutes of my front the last couple of years at one of Mr. Jack Nicklaus’ signature golf courses. Glen Abbey. A golf course that’s been on “death watch” the last several years. Apparently, Oakville the city where Glen Abbey is located is in dire need of more million dollar condominiums (of course I say this very facetiously). So maybe this is Abbey’s “Swan Song”. Next year, the tournament will be held in an even closer location… Hamilton Golf and Country Club. So being semi-local I applied for media credentials which were unceremoniously denied. As much as I’m disappointed I’m more mad than anything. Disappointment is not getting badges for The Masters. When I asked for an explanation for the denial from the Manager of Media and Public Relations (Terry Lenyk) I was given this explanation…

After evaluating the content you’ve produced available on your website, including the content you produced from the 2017 RBC Canadian Open, we deemed that you did not require access granted to media with appropriate working credentials and that you could successfully complete your coverage by joining us as a patron or attending on Tuesday, which is a complimentary admission day.

So am I so good that I don’t need the same access as other websites and publications? Or is this simply a lame copout?

Between this site, Alexander Toth Golf and heavy involvements with other golf communities in the past (Nicklausfan on THP, GolfWRX and Golfballed) I’m not exactly new to this. I’ve been on my own since 2012 Moreover, I take great pride in writing a ton of content heavy in originality. Even with press releases I write my own material in support of the releases (Ralph Lauren re-signing JT was a rare exception). I have zero experience with the brand). In essence, I’m not a hack blogger that copy and pastes everything that wants free access to a golf tournament. I’m legitimate.

Some legends there. How can I get press conferences without credentials?

All that I wanted to do this year was simply provide more up close and intimate coverage for my worldwide audience. I was hoping to get some stellar “In The Bag” pics. Or better yet a chance to interview a player or caddie or two. Last year, Mr. Nicklaus was on hand and I know that having media credentials might have allowed me to get a little closer and get better pictures than the rubbish I managed to take through heads and bad angles. I cannot achieve any of this as a patron. Instead, the guys will think that I’m just another “autograph hunter”. Stephen Ames, I will never forget the look you shot me as you refused to sign my pin flag (2004?) and ignored it after making direct eye contact.. You deserved your trouncing at the hands of Tiger in “that Match Play” back then. Remember that?

The best I could do. People like to see a phenom like Bubba. Because the practice grounds at The Abbey are so NOT fan-friendly.

The funny thing about last year. I remember seeing guys from GolfWRX and MyGolfSpy inside the ropes doing exactly what I wanted to do. Again, the little fish gets screwed. I’m sure this piece doesn’t help my chances either moving towards 2019 either. A shame to cut off a local guy at the knees.