Cleveland Golf. The brand that was founded in 1979 by Roger Cleveland and owned by Sumitomo Rubber Industries Ltd has long been known mostly for their innovations in designing game-changing wedges. The 588 was a stalwart in many golfers bags and to this day is one of the top-selling golf clubs in history. But Cleveland Golf has been about much more than just wedges. They’ve also been a leader in innovation as far as metalwoods go. Did you know that Cleveland Golf was the first golf manufacturer to introduce the industry to the world of 460 cc drivers? Or the first to be involved in the craze that was geometrically based design (The Hi-Bore in 2006)? 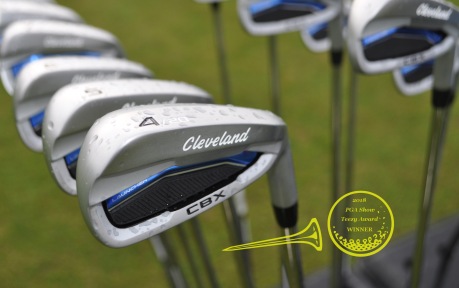 The Huntington Beach, California-based company has developed it’s fair share of terrific iron designs too. Models like the CG 16 Tour, an entirely hybrid-based set the Hi-Bore irons, the Tour Action series of irons (TA5, TA7 etc), CG 1 Tour and of course the infamous (for perhaps the wrong reason) VAS 792 irons that incidentally Corey Pavin played to win a Major at Shinnecock Hills in 1995. From the prettiest of blades to the penultimate in game-improvement irons. For some time a few years ago it nearly looked like that Cleveland Golf was all but out of the equipment game except for the wedge market. Then something happened last fall. The company announced the release of new metalwoods (Launcher HB) and irons… the Cleveland Golf CBX. I was amazed to see this news and I was excited to get down to the PGA Show to see these irons in person.

One of my first stops at the PGA Show Demo Day was in fact the Cleveland Golf/Srixon/XXIO location. The weather was overcast and there was at one point a brief light rain.

Looks – Not to keep going on about the aesthetics but these are an iron that look nearly “Plain Jane” which isn’t a bad thing at all. In fact, for my personal taste I’d rather see an iron clean and bare as opposed to any unnecessary graphics. As I pulled out the 4 iron and 8 iron I compared them side by side and while there was a noticeable difference between the profiles of both the “larger” 4 iron never struck me as being obtrusive or shovel-like. If anything it would instill confidence in my “mind’s eye”. As I flipped over the clubs to examine the soles the “V Sole” grind reminded of the RTX-3 that I had the opportunity to review long-term. Ultimately, that wedge became my gamer and to this day because of the V Sole I have the confidence to play the 52* from anywhere… including flops if I open it up setting it right flat. The sole comes in handy as I explain the performance.

Performance/Feel – Okay I’m not going to mince words. The performance of these Launcher CBX irons are fantastic. Have you ever had the feeling that you were playing an iron that was confused with its genetic make-up? This was the case for the Launcher CBX irons. It’s very much a game-improvement iron but it’s like it thinks it’s a players club. From the inspiring looks at address to the feel at impact. This is a golf club that easily launches the golf ball into the air (living up to the moniker) and as you make impact you really have a strong sense of knowing where the golf club is. What’s more? The feedback is great… well struck golf shots allow you to feel those shots. The sensation is crisp yet soft. There is a true sense of “heat” off of the face and the Cup Face is something that I feel truly works. Of course, I’d love to be on a launch monitor at the show but based on my organic vibes and roots I knew the club (8 iron) was landing some 160 yards away… into the wind. Yes the lofts are bumped but much can be said of the technology that’s packed into the Launcher CBX irons. Shots were repeatable with repeatable high(ish) draws being the “norm”. However, shaping shots was easy as pie. The longer irons produced a more aggressive, penetrating ballflight. Again, elevating the ball easy. 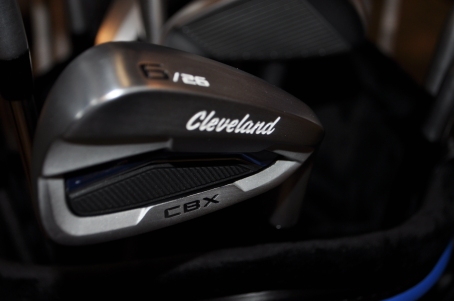 Specialty shots like a punch or “stinger” was a snap but the versatility of the V Sole was very much a winning technology here. Have you ever been in a situation where a 47*-58* lofted club was just too much loft to escape trouble? So instead you need to go to a 6 or 7 iron to escape with a rescue shot (stroke saver”)? The V Sole allows the shot by virtue of its versatility. Huge bonus marks here!!!

Forgiveness – Forgiveness in my opinion is more important than distance. Golf is not about that perfect shot that we pulled off. It’s about how good our misses were. I was really “on” with the CBX Launcher irons in my hands and maybe that was because of the confidence inspiring look. However, I happen to be good enough (at times bad enough) to purposely hit shots off of the toe. Any shots that were struck towards the toe were punished from a distance aspect (as they ought to be). However, misses didn’t flail weakly out to the right. Instead they were straight and never wandered off of their intended line. If you’re going to miss… miss straight.

Conclusion –  The Cleveland Golf Launcher CBX irons are a fantastic golf club that very much deserves to live up to the Cleveland Golf branding that they bare. Not flashy… and that’s alright by me. These are an unassuming that would be dangerous in the hands of a golfer that an easy single digit to something in the 20 range. High performing, forgiveness with tremendous versatility. A lot of golf club with a very reasonable price tag ($700 USD Steel)

***Coupled with the Launcher HB driver, fairway wood, hybrid and CBX wedges Cleveland Golf won the Teezy Award for ‘Most Forgiving Product Range” at the 2018 PGA Merchandise Show. A point that I made known to Communications Manager Noelle Zavaleta on the show floor Wednesday.