In my opinion there have been two companies in particular that have been the biggest “movers and shakers” in the golf industry over the last several years. Because I haven’t had the opportunity to have any long-term demo and testing opportunities with many products most of my evaluation takes place at the PGA Merchandise Show every January in Orlando, Florida. Honestly, it’s my main reason for attending the show for the last 5 or 6 years. While the one company took a step backwards Cobra Golf has continued to move the needle on the golf industry.

Cobra Golf long-known for its affiliation with Greg Norman is also known for a number of other things. Among them, they can be looked upon as a brand for the young or young-at-heart because they’re trendy. Trendy? Sure, look at the colour schemes of their previous products. Remember the television spots when it was “Go Time” where Rickie Fowler was in the room with all of the oranges on the floor? That was in 2012 when Cobra Golf introduced orange-crowned drivers (The Fowler Edition AMP). Following on the heels of that driver other colours were introduced (blue, red, silver, white, pink, a Masters Edition green, and the aqua known as the colour choice of Lexi Thompson). The AMP Cell, BiO Cell and Fly-Z followed with the latter leading to a fun booth at the PGA Show where Cobra actually had a functioning teeter-totter in place. It was clearly to demonstrate the ability of the Fly-Z and it’s ability to move weight back and forth. Over the last several shows Cobra Golf in my opinion has had the best performing metalwoods. Queue the fast forward to the present. 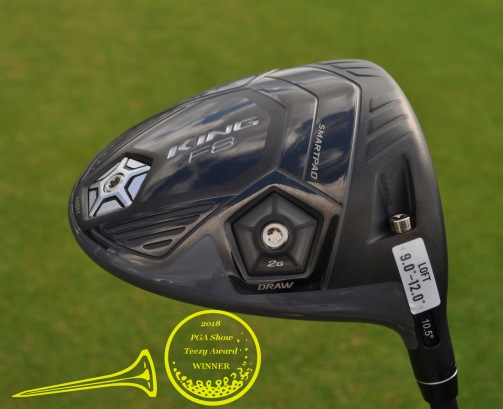 For 2018, Cobra Golf introduced the F8/F8+ range of products. Personally speaking, the F7 range of 2017 didn’t wow me so I was pretty excited to see what the F8 was going to be about. As pictures and content slowly showed up over social media the more intrigued I became. First up was the face. With the F8 range the face of the driver is a milled face. Next was the finish(es) that would be offered with my eye very keen on the finish known as “Nardo”. An eye-catcher without being a bright orange or blue. Then there was the addition of Cobra Connect powered by Arccos introduced by Cobra in 2017. Clearly there was a combination of many things from aesthetics to technology that made me curious. Below is a rundown of some of the features of the F8/F8+ driver.

While in Orlando at the PGA Show Demo Day held at Orange County National Golf Center and Lodge I had the pleasure and opportunity to meet with Tom Olsavsky who is the VP of Research and Development for Cobra Puma Golf. Many thanks go out to Communications Manager Rachel Rees for arranging my time on Demo Day. During my time with Mr. Olsavsky I learned a lot more of what separates the F8 range apart from others. most notably is the face. As mentioned, the F8 is precision-milled as opposed to the usual hand-polished common in the industry. Not only does CNC machining mean more precision when it comes to face thickness… think of it in another way. 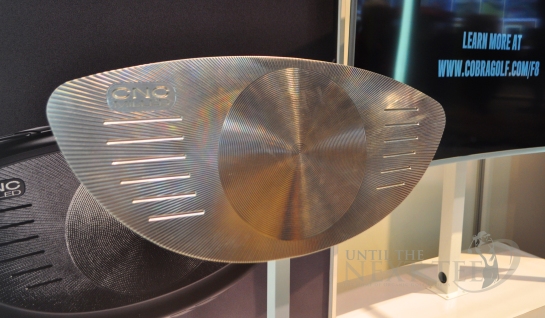 Picture yourself working in a foundry somewhere… anywhere. It’s a real dirty and dark environment. Perhaps it isn’t the healthiest of places to be. Now picture it when it’s 100*F outside. You work what seems endless days. Maybe the quality of your work deteriorates a little bit. Now on the flip side of the coin. You’re working on a CNC lathe. The room is clean and air-conditioned. The work environment is cleaner, safer and the quality of work does not suffer. Which would yield the happier workers?

The face of the F8 range isn’t just about aesthetics… the face is about a lot more than looks. The thinner face also creates more ballspeed and potential length. The body of the F8 features 8-1-1 Titanium while the face is forged saving weight to be placed elsewhere in the head to enhance launch conditions. Cobra Golf spent a lot of time in researching golf swings… impact in particular. What R&D found was most golfers (99%) have an array of areas on the face where the make impact. From low heel to high toe. So instead of remaining in the mold of other manufacturers where the sweet spot is a circular in nature Cobra Golf expanded the sweet spot to be elliptical allowing for more forgiveness and ballspeed across the face on misses. Cobra Golf uses “Dual Roll Technology” where the curve of the face is more pronounced on the top than the bottom the face. The purpose for this is to optimize launch and spin on shots low or high on the face. Incorporated into the F8 range is the “MyFly 8 With Smart Pad” which allows for further adjustment options to further optimize your launch and spin conditions. Three stock shafts including the Aldila NV 2KXV Blue 60, Aldila NV 2KXV Green 65 and the Project X Hazrdus Yellow 75. The crown is ultralight carbon fiber which features “360 Aero Technology”. Instead of using titanium strips on the crown Cobra Golf researchers decided on polymer strips instead which is lighter aiding the aerodynamics while use on the sole makes it more durable. Cobra Golf did everything they could to reduce the weight while improving aerodynamics and speed.

Lot’s of interesting tech talk… but how did it perform for this mere mortal? First off, I will preface this by saying that there is a reason why it won the first ever Teezy Award.

Aesthetics – Upon looking at this driver in the address position it just looks like a serious weapon. I love the Nardo finish which comes from the automotive industry. When the light hits the paint at a certain angle metallic flake noticeable. The carbon fiber crown is evident while the polymer strips give the F8/F8+ a sleek, stealthy look. Flipping over the F8+ the first thing that my eyes went to were the dual pentagon-shaped weight screws. On the F8+ Cobra Golf also allowed for further adjustments. By switching the weights back and forth you can optimize your launch and characteristics even more by changing the center of gravity from front to back while the F8 the ability to change the center of gravity back and heel is an option. The F8+ really does suits my needs the best of the two. The graphics meld seamlessly together. The face! Oh the face! I love the intricate CNC-milling of the face and in particular I really thought that the “disc” looked smart! Such a fresh change and escape from the usual and mundane. The F8 has a slightly larger footprint than the F8+.

Performance – Right from the acoustics of my first pass I knew that Cobra Golf got this one right. I think they missed in this department with the F7. With the F7 the sound and feel translated into a feel that wasn’t inspiring bordering on “ho-hum”. The F8/F8+ is a massive improvement over 2017. When you make impact the sound is solid, authoritative and has the best sound of any driver I made passes with during the 2018 PGA Show. The ballflight offered a penetrating trajectory and I felt that the F8+ was an “easy swinger” regardless of the recommended handicap rating for players wanting to game the F8+ (Tour to 15 Handicap). But don’t get trapped into thinking if you’re a 20 handicap that you can’t use one. Try both and go with the one with the better results of the two. I used a stock set-up where the shaft was the Project X HZRDUS Yellow 75 X. Every swing yielded the same repeatable aggressive ballflight. Long into a quartering hurting wind (from the right) and I have no doubt that it was the longest of the show for me. The F8 was more of the same although I did find the flight higher… as might be expected by the weight configuration. I really feel that the F8+ would make golf holes shorter for me and definitely would put me in better position for setting up better Par 5 scoring. Shaping shots was a breeze and I always felt like I was in control at all times on the tee with the F8/F8+ in my hands. Confidence inspiring!! 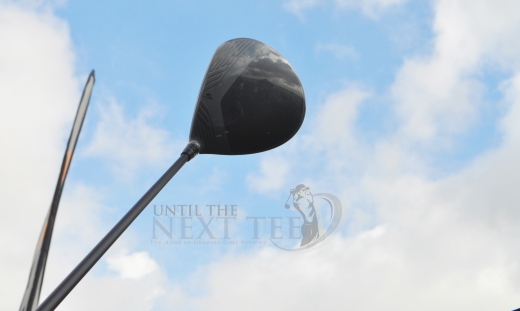 Cobra Golf introduced the addition of Cobra Connect powered by Arccos in 2017. For those out there unfamiliar with Cobra Connect and Arccos the premise here is that it “allows golfers to track their driving distance and accuracy using detailed stats and analysis to improve their game”. Through the use of a sensor in the end of the grip golfers can collect over the course of several rounds. At this point, Cobra Connect (Arccos) can actually give you club recommendations based on your yardages and tendencies. This data can really help golfers improve.

Like I said, the Cobra Golf F8/F8+ stole the spotlight at the 2018 PGA Merchandise Show Demo Day. It won the Top Driver category quite handily and I knew it by the time the show moved to the Orange County Convention Center on Wednesday. I tried to tell Tom Olsavsky about my conclusion in person but never found him. Cobra Golf… you did it again! If you need to purchase a new driver have the Cobra Golf F8 range on your “to try” list.