One of the largest markets in the golf industry is accessories. Golf accessories come in various forms whether it’s your favorite hat, golf towel, pitch mark repair or sunglasses. My father had a saying about the brain and the same could be said of your eyes. He said, “Son, you only have one of them so always protect it.” I guess upon reflection it doesn’t really apply to eyes seeing that we have two of them but you get the gist of what I’m trying to say.

I had plans in 2017 to attend the PGA Fashion Show and Demo Experience in Las Vegas, NV this year but due to unforeseen circumstances I couldn’t attend. I was pretty bummed about not going and I actually had a couple of company’s reach out to me to stop at their booths. One of these companies was Electric Eyewear.

For those people who aren’t familiar with Electric Eyewear, they’re a brand based in sunny Southern California. The brand prides itself on being the “world’s greatest independently owned sunglass brand”. While their products are designed in California the sunglasses are produced in Italy with products that are high in quality. Electric has been doing this for the last 18 years. Electric is more than just sunglasses as the brand is also involved in creating snow goggles, watches, bags, and apparel. When it comes to the brand of sunglasses that Electric brings to the market they aren’t shy in saying what their intentions are. They aren’t about wearing the same type of clothes that your father or grandfather wore nor are they about playing golf with a set of clubs that belong tucked away in an old dusty garage somewhere buried in layers of dust and cobwebs. No sir! (or ma’am) This brand is about doing things differently and having a bit of an edge while doing so.

The Knoxville frames are the brands leading seller and have been so for the last decade. They’re trendy, timeless and can darn near suit anyone. The Knoxville’s come in multiple models which includes my tester pair (Knoxville S), Knoxville XL, Knoxville Pro,  and the Knoxville Union. Lens types are numerous where they offer lenses in blue, grey, bronze, green and rose. electric also offers lenses that are polarized with the polarized lenses, of course, is great for fishing and further reducing glare.

These sunglasses are packed with technology and features that start with a matte black frame that is very lightweight. The frame is composed of “6 base mold injected Grilamid frame in featherweight construction with performance grip nose bridge and temple tips. Innovative double action hinge system”. The lenses themselves are constructed of “6 base OHM Polycarbonate lens. 100% UV protection. Up to 98% Blue Light protection”. I will be elaborating more on “OHM” as this technology deserves a section of its own. Also adding to sharper visibility and better depth perception is the “Grey Tint” that Electric employs.

OHM. As mentioned OHM deserves its own section and that’s because I really feel that this is where the magic of these sunglasses happens. All sunglasses from Electric feature lenses infused with Melanin. Melanin is a pigment that gives us (and other living species) our hair, eye, and skin color. Instead of trying to describe what it does as far as lenses from Electric goes I’ll opt to post illustrations from their website. 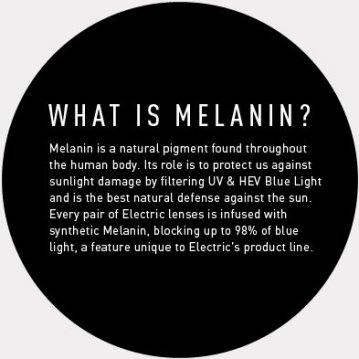 As you can see these lenses are something special but how well do the Knoxville S sunglasses perform?

In a word these sunglasses are outstanding. Firstly, they come with a neat black pouch that is great for wiping the lenses clean when they become dirty. The cloth is soft and of course, the pouch is handy for stowing them away when they aren’t in use. They are lightweight as described and they are what I’d describe as “uber comfortable”. It’s almost like you aren’t wearing them in the first place. The matte black finish is simple and the identifying branding marks are very subtle both on the outside of the frame (at the hinge) and on the inner part of the arm. The grips that ride on top of the ears are rubberized and whether it’s normal wearing or while wearing while golfing the sunglasses never slip off of the face (whether you’re swinging the club or picking up your birdie from the cup. Again though the lenses are the star of the show here! when wearing the Knoxville S sunglasses my eyes never experienced any strain. In my opinion, the melanin infused lenses (OHM) work and are great at what they do. There is never a glare and my vision (eyes) are never strained which speaks volumes. Several years ago my eyes were injured when I lost my sunglasses during a canoe trip when I was 15 years old. They don’t do well when it’s really bright and when I wear these sunglasses there is no strain whatsoever. Colors are vivid, well-defined and there is no distortion. 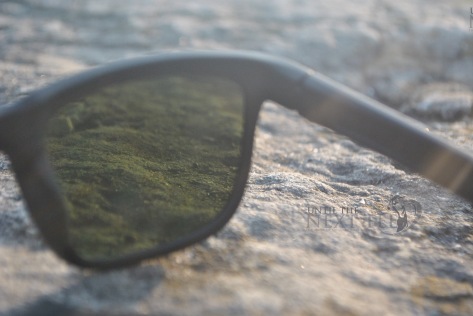 These Knoxville S sunglasses are sporty, stylish and they perform. They are terrific!! I admit that I was ready to pass judgment on these sunglasses much sooner and write about them but I delayed until 2018 seeing that I planned for this to be one of the first reviews of the New Year. I’m glad that I waited because as good as they were in the late summer/early fall I never realized how truly great they were until the snow was laying on the ground. When its bright with the sun reflecting off of the snow often you can’t see. It’s brutal! Like today as I’m sitting here writing. The Knoxville S is so good at cutting down the glare off of the snow that I can’t even express into words.

Electric claims to be the greatest independent sunglass company and based on my experiences they might very well be. For more information on these sunglasses and their other products please visit Electric California