There was no way that I was going to let this week’s Tour stop pass by without writing about it. Sure I didn’t write about the Open Championship last week but what was there to really say? Two words? Jordan Spieth. That pretty much summed it up… his “hootspa” is borderline legendary or better yet special. I really felt bad for Matt Kuchar. But enough about last week and it’s time to write about this week.

Our National Championship is on a very tough place on the schedule and I really wish something could be changed. There is prestige and a rich history when it comes to Canada’s Open. However as it stands it’s right after The Open Championship and right before The WGC – Bridgestone Invitational so many notables tend to sit out. This year the RBC Canadian Open was held in nearby Oakville, Ontario which serves as a home to Golf Canada headquarters, the Canadian Golf Hall of Fame, and the Jack Nicklaus designed Glen Abbey Golf Course. The site of this year’s RBC Canadian Open. This year was the 28th time that “The Abbey” has hosted the illustrious event. #OurOpen is uniquely Canadian with goalie mask tee markers and chairs that say “Quiet Eh?!” on the back of them. 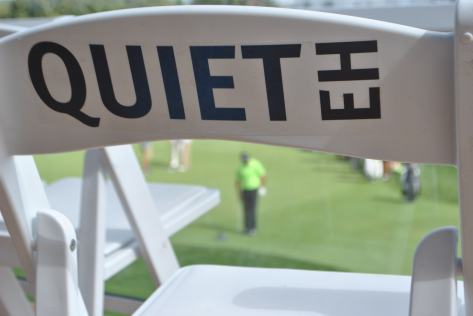 I was at the venue to get a feel for what the course was like this year after last year’s tough conditions. In 2016 our entire region was mired in a drought of epic proportions and even Glen Abbey fell victim. I arrived at the course shortly after 8 a.m. on Tuesday to take in some practice rounds. As I arrived at the site and walked through the main entrance I caught a glimpse of Hole#8 where Charley Hoffman was hitting a few shots. It was completely obvious that the weather had been much better than last year and as a result the grounds crew at “The Abbey” had a course well-prepped. After taking in some of the Opening Ceremonies which saw legends gather for the newest inductions into the Canadian Hall Of Fame I walked the golf course. By the way some of the names on hand included Lorie Kane, Mike Weir, Bob Vokey (whom until recently I never knew was a Canadian) and Mr. Jack Nicklaus.

As I strolled across the 16th fairway I finally realized how lush and pristine Glen Abbey truly was. The course was immaculate!! A job well done to the superintendent and the crew. Upon looking at the course I knew that we were going to be seeing some low scoring rounds. Upon finishing my walk around “The Abbey” (I have never played it) I decided to watch the guys on the range. From the long hitting Bubba Watson, the young gun Smylie Kaufman to the wiley veteran (and former RBC Canadian Open Champion Vijay Singh) to last year’s champion Jhonnotan Vegas whom I casually said “Go get it again” to in passing. Little did I realize that my semi-prognostication would turn out. Honestly, I was disappointed to not see Ian Poulter, Matt Kuchar or Brandt Snedeker whom were apparently at another local course for a corporate outing. I managed to get a few failed selfies (tough with DSLR cameras) with Shane Lowry, Ollie Schniederjans, Nick Watney and Ben Crane to name a few. By the way… Ben is a pretty cool cat.

So the tournament was played and as I figured we saw some real low scoring throughout the tournament. The weather was comfortable, the winds were pretty much benign all week and from I could ascertain the greens were receptive. Robert Garrigus tied a course record with a 62. Hudson Swafford fired a -7 (65). Martin Flores had back to back 66’s, Charley Hoffman was the 54 hole leader after a -7 on Saturday getting him to -17 overall. Then came Sunday.

A leaderboard that was loaded with scores that would win nearly every tournament on Tour. With many big names not in the field (more on that later) there was still some star power on the front page of the leaderboard. Consistent low rounds were shot all week by the rain-softened Glen Abbey. On Sunday Gary Woodland, Ian Poulter, Tony Finau were all right there. Lurking not too far behind them was World #1 Dustin Johnson. But after carding four round totals of -21 a playoff consisting of Vegas and Charley Hoffman would determine the winner. After both players hit poor drives on the first playoff hole Charley Hoffman left the door open for Jhonny Vegas. Vegas took advantage of a clear shot while Hoffman had to lay up. Vegas would sink a birdie putt and become the first winner to win back to back titles since Jim Furyk. (Fun Fact: Furyk’s back to back wins were won on two different courses)

With the re-cap out of the way I just wanted to touch on a few other topics very briefly.

All of these crazy low scores. Are they good or bad for the game? What is the cause of these lower scores? Better player development… better technology… better equipment or does the ball need to be dialed back like Mr. Nicklaus has suggested? Are the superintendents doing too good of a job?

To those not in the know Glen Abbey has been on life support for what seems an eternity. Before I get into that I want to say that it would be shame if the Jack Nicklaus course would fall victim to real estate. While this isn’t a Golf Canada issue it is a ClubLink Enterprises Limited owned golf course. The CEO K. Rai Sahi confirmed in 2015 that The Abbey was going to be developed into high-end housing. But how did the course get to here? Makes you wonder about the pricing (current peak Green Fee $236) and quite possibly a tee sheet that is more empty than full. That said… Glen Abbey WILL once again be the host of the RBC Canadian Open in 2018.

As far as Golf Canada this inquiry is for you. Glen Abbey sees the course get reconfigured from its everyday configuration to an altered configuration for the tournament (For example… Hole #1 is a Par 5 every day. For the Canadian Open it’s the Par 4 8th hole). This year #TheRink was a terrific idea. Potentially this hole could be as exciting as #16 at the Waste Management Open. We are a fanbase that consists of raucous hockey fans… wouldn’t it be fun to figure out a way to see #TheRink come into play late on Sunday? Somewhere in the last few holes? The drama and atmosphere would be spectacular! It would be a great way to get the fans (and their wallets) out there in full force. Think outside of the box. You can do it!