One of the many things that I learned on my trip to Florida and in particular during my visit to the World Golf Hall of Fame is that technology has really advanced in golf shafts. From the era of hickory shafts to the advent of steel. Even for a brief period in time aluminum was used. Eventually golf found graphite… a light material that would give golfers more kick measuring more distance. It wasn’t until Frank Thomas in 1967 joined Shakespeare (fishing rod manufacturer) who gave him a task. Build a golf shaft using the latest space-aged materials. In 1970 Mr. Thomas’ creation was unveiled at the PGA Merchandise Show.

So we fast forward the clock to 2017 and this year’s PGA Merchandise Show. Leading up to the PGA Show I was approached by Mary Beth Lacy of golf media relations firm Mary Beth Lacy Inc if I wanted to attend the launch of a new golf shaft company. I accepted the invitation and was given the details. In the parking lot of Orange County National where Demo Day was being held I (and others) would be picked up by a well-equipped black limo bus with the letters TPT emblazoned on it at 3 o’clock. I made my way to the parking lot and approached the bus. I was met by individuals from TPT. Sebastian Sebayang introduced himself to me as did CEO of NTPT James Austin and Chairman and Co-Founder Francois Mordasini. Before continuing on I should first of all explain what NTPT does.

NTPT stands for North Thin Ply Technology a Swiss company that carved its niche in the creation of high performance sports components. If you’ve watched events like Formula 1 racing, the America’s Cup races, alpine skiing and/or snowboarding the chances are very likely that you have seen their products without even realizing it. Also, they have built components for very high-end watch company Richard Mille. Their materials have also been used on satellites that orbit our planet and the record-breaking solar powered aircraft “Solar Impulse”. Their wealth of knowledge in the composites business speaks for itself. So, it only made sense that they delved into the golf industry.

TPT (Thin Ply Technology) has utilized a patent-pending manufacturing process that enables “golf shafts to be made with exceptionally accurate fibre placement in a highly uniform way around the shaft. This method creates a shaft with no spine and overcomes the inconsistencies sometimes seen in golf shafts produced by the more traditional table rolling methods. TPT golf shafts provide exceptional feel for the golfer leading to more accurate shot dispersion, low spin, and increased distance”. The key word if any from their press release is “spine” or the lack thereof. When golf shafts have no spine (almost all do… it’s why SST Puring was created) the shaft can simply load and kick more effectively. Also, the lack of a spine allows for more stability creating a shaft that is “smooth”. TPT would partner with Biomechanist J.J Rivet and one of the world’s best golf coaches David Leadbetter (both of whom worked together on “The A Swing”) in relaying vital technical information to TPT. I think it’s important to note that the team from TPT have no golf experience and Mr. Mordasini is passionate about learning about golf shafts and is quite eager to improve golfers through his material.

The contingent was driven to the David Leadbetter Academy at ChampionsGate where we took part in a presentation that gave us a more in-depth look at the TPT golf shafts. TPT golf shafts are said to be the first of their kind meaning that it’s the first time a shaft has been designed with keeping in mind physical capabilities and limitations. Unlike the usual flex specifications used in the golf industry (L,R,S etc) TPT does not do this. Instead they offer four different “Blue Series” of shafts (15, 16, 17, and 18) all of which are designed for various swing speeds. While the 15 Series will suit golfers with swing speeds ranging from 105-120 mph the 16 Series is geared towards golfers with swing speeds of 90-105 mph. The 17 Series is aimed at golfers with speeds of 75-90 mph whilst the 18 Series targets golfers in the slower 60-75 mph range. The shafts regardless of the series features shafts with two bend profiles. A mid-kickpoint and a low kickpoint are available. All shafts also feature a middle of the road torque rating which aids in feel as well. 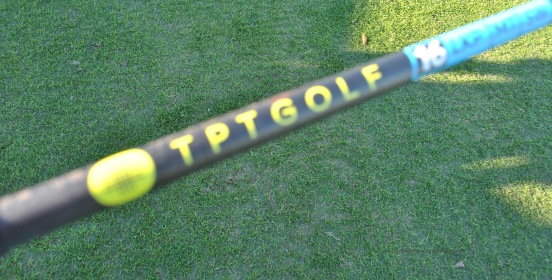 So having said all of this I proceeded to start the process of finding the right shaft. I should point out that the heads of all of the drivers were Callaway Golf Big Bertha Fusion. I thought that I would start with the 17 Series to see what would happen. As one might be able to predict controlling the ball with this shaft proved to be difficult.  Having dispensed with the fun and games I got down to business. Find the right fit. I was then placed into a 16 Series MK shaft and I noticed a ball flight that was a little higher than I like. While it was a little higher than expected the dispersion was terrific. I found the 16 Series TPT to be very smooth from takeaway to finish. In particular I found it to be very stable through impact. I was certain that this was the shaft and then the crew decided to try me with a 15 MK Series. The dispersion tightened even more and my ballflight was right where I would like to see it. There was no evidence of ballooning ball flights as the ball just penetrated and kept going.  We all liked what we saw and I went on the Trackman. We saw consistent launches of 12*, backspin rates of 2200 rpm and other than a couple of swings that were turned over through impact. Consequently, that was the only real miss. Just such a stable shaft.

I think that the team at TPT has changed the way that golf will look at shafts and how they’re constructed. I have long said over the last several years that the parity in the industry from manufacturer to manufacturer and head to head is too close. Moreover, I have suggested that it really boils down to the shaft being used. TPT in my estimation has a game changer in it’s midst. Of note, European PGA Tour player Oliver Wilson was there and plays the shaft in his driver and is currently testing for the fairway wood. Also, LPGA player Jodi Ewart Shadoff happened to be there that day testing the shafts as well. From what I overheard she was really liking the shaft. Who knows… maybe TPT has the next big thing in golf. They definitely have the passion and knowledge to develop it.

Until The Next Tee!